The Mini Countryman is a subcompact crossover, the first car of this type to be launched by Mini. It was launched in 2010 and received a facelift in 2014.

The 2010 Mini Beachcomber Concept was based on the Crossover Concept and the Mini Countryman, with no doors and no conventional roof. It included ALL4 all-wheel drive and offroad wheels. It was unveiled at the 2010 North American International Auto Show.[3][4][5] 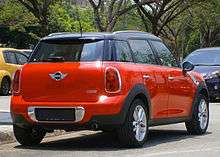 The design of Mini's first five-door crossover echoed that of the Mini Crossover Concept. The production model was first unveiled at the 2010 Geneva Motor Show.[6][7] UK models went on sale on 18 September 2010.[8][9] The availability of models varies between markets, with the USA and Russia not taking the One versions or any diesel powered models. The All4 all-wheel-drive option is available on variable models, again depending on the country.

The ALL4 all-wheel-drive powertrain includes electro-hydraulic differential, positioned directly on the transmission's final drive, to vary the power distribution from front to rear. Under normal driving conditions, up to 50 percent of the engine's power goes to the rear wheels. Under “extreme” conditions ("extreme" being undefined) up to 100 percent heads to the back wheels.[10]

In 2012 the Countryman received some minor amendments, including an EU6 exhaust emissions standard compliance for the One and Cooper models, and using a different clutch material and improved software to reduce stalling problems.[17][18] They went on sale from November 2012.[19]

Changes to US 2014 model year range included the omission of the interior "Centre Rail" feature from the back seats. The rail is still present in the front.[23]

This is a race car version of Mini Cooper S ALL4 developed with Prodrive beginning in early 2009, with a 1.6-litre, four-cylinder turbo-charged engine from BMW Motorsport. The first test drive for the Mini Countryman WRC, which would also be available to customer teams, was planned for autumn 2010.[24] It was unveiled at the Paris Show in 2010.[25][26]

Pulitzer Prize winning automotive journalist Dan Neil suggested the Countryman had jumped the shark – that is to say the car pushed the Mini ethos beyond relevance, marking the zenith of popularity and the start of decline. Neil suggested that by making a vehicle that is longer, wider and taller, the company had forsaken the inner logic of the brand: excellent handling in a tiny size. In a March 2011 review titled What Part of 'Mini' Did You Not Grasp, BMW? , Neil wrote "with the Countryman, tiny sharks have been jumped."[32] The Countryman became Mini's second most popular model after the iconic Hardtop. The very first year of production it sold almost 50% more units than the Clubman, Convertible, and Coupe added together. Almost 1 out of every 3 vehicles Mini sold in 2011 was a Countryman (U.S. market).[33] This trend continued through 2012 also with almost 1 in 3 MINIs sold again being a Countryman - both in the US and globally.[34] By the end of 2013 the Countryman was 31% of total U.S. sales for the Mini brand.[35]

A minor facelift to the Countryman was unveiled at the 2014 New York International Auto Show.[36] Changes include a new structure of the hexagonal radiator grill, underride guard elements for the Cooper S Countryman ALL4 and additional body colour options. It went on sale in July 2014. All variants carried over.[37][38] US variants include Cooper, Cooper S, Cooper S ALL4, John Cooper Works (with ALL4), with 6-speed manual transmission or optional 6-speed automatic transmission.[39]

The second generation Countryman will be introduced at the LA Auto Show in November 2016, and go on sale in February 2017 in Europe, and March elsewhere.[40][41] It will launch with three variants: Cooper (FWD or ALL4), Cooper S (FWD or ALL4), and in June 2017, the new Cooper S E ALL4 plug-in hybrid. The new Countryman is 8 inches longer than the first generation, and 1 inch wider. The Cooper Countryman will be powered by a turbocharged 3-cylinder engine, while the Cooper S will use a new 2.0 liter turbo I4. The Cooper S E combines the turbo I3 with an electric motor and a 7.6 kWh lithium-ion battery, with an electric range of up to 40 kilometres (25 mi).

In July 2010, Mini announced plans to enter the World Rally Championship (WRC)[42] with the Countryman beginning in 2011, and entering season-long tournament starting from 2012.[43] The factory team had its first test outing of the 2011 WRC season at the 2011 Rally d'Italia Sardegna, before taking on the full calendar in 2012 and 2013. In the Intercontinental Rally Challenge, the RRC version had its first win at the 2012 Tour de Corse, driven by Dani Sordo.[44] After just one season Mini terminated its works involvement in the World Rally Championship.[45] The car continued to be used outside of the WRC, and won the 2012 Qatar International Rally and 2014 Barum Czech Rally Zlín, also taking podium finishes at the 2013 Rally of Lebanon.

The All4, equipped with a straight-six engine, has won the Dakar Rally every year since 2012, with Stéphane Peterhansel driving in 2012[46] and cars from German Monster Energy X-raid Team won the 2013 Dakar Rally.[47][48][49] Mini won the car category of the 2014 Dakar Rally with the All4 driven by Nani Roma.[50] Another overal win in the 2015 Dakar Rally made it four straight wins, with a 100% finish rate. The same team won the Abu Dhabi Desert Challenge four times from 2011, with other wins in the Baja Aragón, Desafio Ruta and Desafio Inca, and being the runner-up in the 2011 Silk Way Rally, 2012 Desafio Litoral Rally and 2015 Baja Russia Northern Forest. Nasser Al-Attiyah won the 2015 Rallye des Pharaons.

Jean-Philippe Dayraut used a Countryman to win the Andros Trophy for ice racing in 2013 and 2014.

Team JRM entered the 2015 FIA World Rallycross Championship season, acquired ex-Prodrive Minis, which unlike its competitors, using 1.6-litre engine with some concessions so the cars were able to competing with 2.0-litre engine cars. Guy Wilks reaching the final in the British round. It was also entered into the 2013 Global RallyCross Championship, with Liam Doran winning the Munich round. A further car was entered into the 2015 FIA European Rallycross Championship season, driven by Riku Tahko.

The team eventually entering FIA World Rallycross full-time, with Liam Doran as the driver. The Minis losing its concessions, as they debuted their self developed 2.0-litre engine in the 4th round in Great Britain.

The Countryman is primarily built in Graz, Austria under contract by Magna Steyr, making it the first of the BMW era Minis to be manufactured entirely outside the UK.[52]

In 2013, assembly of the Countryman was expanded to three international locations: from April 2013 at BMW's plant near Chennai, India, specifically for the Indian market[53][54] from June 2013 at the BMW Group Malaysia Assembly Plant in Kulim, Kedah,[55] and at the BMW Manufacturing Thailand plant in Rayong from August 2013.[56]