This article is about the novella. For other uses, see Carmilla (disambiguation).

Carmilla is a Gothic novella by Joseph Sheridan Le Fanu and one of the early works of vampire fiction, predating Bram Stoker's Dracula (1897) by 26 years. First published as a serial in The Dark Blue (1871–72), the story is narrated by a young woman preyed upon by a female vampire named Carmilla, later revealed to be Mircalla, Countess Karnstein (Carmilla is an anagram of Mircalla). The story is often anthologized and has been adapted many times in film and other media.

Carmilla, serialized in the literary magazine The Dark Blue in late 1871 and early 1872,[1] was reprinted in Le Fanu's short story collection In a Glass Darkly (1872). Comparing the work of the two illustrators, David Henry Friston and Michael Fitzgerald, whose work appears in the magazine but not in modern printings of the book, reveals inconsistencies in the characters' depictions. Consequently, confusion has arisen relating the pictures to the plot. Isabella Mazzanti illustrated the book's 2014 anniversary edition, published by Editions Soleil and translated by Gaid Girard.[2][3]

Le Fanu presents the story as part of the casebook of Dr. Hesselius, whose departures from medical orthodoxy rank him as the first occult doctor in literature.[4]

Laura, the protagonist, narrates, beginning with her childhood in a "picturesque and solitary" castle amid an extensive forest in Styria, where she lives with her father, a wealthy English widower retired from service to the Austrian Empire. When she was six, Laura had a vision of a beautiful visitor in her bedchamber. She later claims to have been punctured in her breast, although no wound was found.

Twelve years later, Laura and her father are admiring the sunset in front of the castle when her father tells her of a letter from his friend, General Spielsdorf. The General was supposed to bring his niece, Bertha Rheinfeldt, to visit the two, but the niece suddenly died under mysterious circumstances. The General ambiguously concludes that he will discuss the circumstances in detail when they meet later.

Laura, saddened by the loss of a potential friend, longs for a companion. A carriage accident outside Laura's home unexpectedly brings a girl of Laura's age into the family's care. Her name is Carmilla. Both girls instantly recognize the other from the "dream" they both had when they were young.

Carmilla appears injured after her carriage accident, but her mysterious mother informs Laura's father that her journey is urgent and cannot be delayed. She arranges to leave her daughter with Laura and her father until she can return in three months. Before she leaves, she sternly notes that her daughter will not disclose any information whatsoever about her family, past, or herself, and that Carmilla is of sound mind. Laura comments that this information seems needless to say, and her father laughs it off.

Carmilla and Laura grow to be very close friends, but occasionally Carmilla's mood abruptly changes. She sometimes makes romantic advances towards Laura. Carmilla refuses to tell anything about herself, despite questioning by Laura. Her secrecy is not the only mysterious thing about Carmilla; she never joins the household in its prayers, she sleeps much of the day, and she seems to sleepwalk outside at night.

Meanwhile, young women and girls in the nearby towns have begun dying from an unknown malady. When the funeral procession of one such victim passes by the two girls, Laura joins in the funeral hymn. Carmilla bursts out in rage and scolds Laura, complaining that the hymn hurts her ears.

When a shipment of restored heirloom paintings arrives, Laura finds a portrait of her ancestor, Mircalla, Countess Karnstein, dated 1698. The portrait resembles Carmilla exactly, down to the mole on her neck. Carmilla says she might be descended from the Karnsteins even though the family died out centuries before.

During Carmilla's stay, Laura has nightmares of a large cat-like beast entering her room and biting her on the chest. The beast then takes the form of a female figure and disappears through the door without opening it. In another nightmare, Laura hears a voice say, "Your mother warns you to beware of the assassin," and a sudden light reveals Carmilla standing at the foot of her bed, her nightdress drenched in blood. Laura's health declines, and her father has a doctor examine her. He finds a small blue spot on her chest and speaks privately with her father, only asking that Laura never be unattended.

Her father then sets out with Laura, in a carriage, for the ruined village of Karnstein, three miles distant. They leave a message behind asking Carmilla and one of the governesses to follow once the perpetually late-sleeping Carmilla wakes. En route to Karnstein, Laura and her father encounter General Spielsdorf. He tells them his own ghastly story.

At a costume ball, Spielsdorf and his niece Bertha had met a young woman named Millarca and her enigmatic mother. Bertha was immediately taken with Millarca. The mother convinced the General that she was an old friend of his and asked that Millarca be allowed to stay with them for three weeks while she attended to a secret matter of great importance. 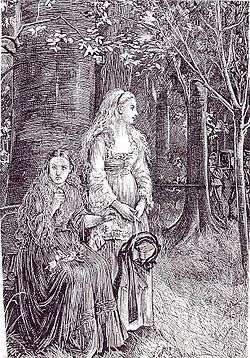 Funeral, illustration by Michael Fitzgerald for Carmilla in The Dark Blue (January 1872)

Bertha fell mysteriously ill, suffering the same symptoms as Laura. After consulting with a specially-ordered priestly doctor, the General realized that Bertha was being visited by a vampire. He hid with a sword and waited until a large black creature crawled onto his niece's bed and to her neck. He leapt from his hiding place and attacked the beast, which took the form of Millarca. She fled through the locked door, unharmed. Bertha died immediately afterward.

Upon arriving at Karnstein, the General asks a woodman where he can find the tomb of Mircalla Karnstein. The woodman says the tomb was relocated long ago by the hero who vanquished the vampires that haunted the region.

The party is joined by Baron Vordenburg, the descendant of the hero who rid the area of vampires long ago. Vordenburg, an authority on vampires, has discovered that his ancestor was romantically involved with the Countess Karnstein before she died and became one of the undead. Using his forefather's notes, he locates Mircalla's hidden tomb. An Imperial Commission exhumes the vampire's body. Immersed in blood, it seems to be breathing faintly, its heart beating, its eyes open. A stake is driven through its heart, and it gives a corresponding shriek; then the head is struck off. The body and head are burned to ashes, which are thrown into a river.

Afterwards, Laura's father takes his daughter on a year-long tour through Italy to recover from the trauma and regain her health, which she never fully does. It is implied that she dies some time following her encounter with Carmilla.

As with Dracula, critics have looked for the sources used in the writing of Carmilla. One source used was from a dissertation on magic, vampires and the apparitions of spirits written by Dom Augustin Calmet's titled Traité sur les apparitions des esprits et sur les vampires ou les revenans de Hongrie, de Moravie, &c. (1751). This is evidenced by a report analyzed by Calmet, from a priest who learned information of a town being tormented by a vampiric entity 3 years earlier. Having traveled to the town to investigate and collecting information of the various inhabitants there, the priest learned that a vampire had tormented many of the inhabitants at night by coming from the nearby cemetery and would haunt many of the residents on their beds. An unknown Hungarian traveler came to the town during this period and helped the town by setting a trap at the cemetery and decapitating the vampire that resided there, curing the town of their torment. This story was retold by LeFanu and adapted into the thirteenth chapter of Carmilla [5][6]

According to Matthew Gibson, the Reverend Sabine Baring-Gould's The Book of Were-wolves (1863) and his account of Elizabeth Báthory, Coleridge's Christabel (Part 1, 1797 and Part 2, 1800), and Captain Basil Hall's Schloss Hainfeld; or a Winter in Lower Styria (London and Edinburgh, 1836) are other sources for Le Fanu's Carmilla. Hall's account provides much of the Styrian background and, in particular, a model for both Carmilla and Laura in the figure of Jane Anne Cranstoun, Countess Purgstall.[7][8]

Carmilla, the title character, is the original prototype for a legion of female and lesbian vampires. Though Le Fanu portrays his vampire's sexuality with the circumspection that one would expect for his time, it is evident that lesbian attraction is the main dynamic between Carmilla and the narrator of the story:[9][10]

Sometimes after an hour of apathy, my strange and beautiful companion would take my hand and hold it with a fond pressure, renewed again and again; blushing softly, gazing in my face with languid and burning eyes, and breathing so fast that her dress rose and fell with the tumultuous respiration. It was like the ardour of a lover; it embarrassed me; it was hateful and yet overpowering; and with gloating eyes she drew me to her, and her hot lips travelled along my cheek in kisses; and she would whisper, almost in sobs, "You are mine, you shall be mine, and you and I are one for ever". (Carmilla, Chapter 4).

When compared to other literary vampires of the 19th century, Carmilla is a similar product of a culture with strict sexual mores and tangible religious fear. While Carmilla selected exclusively female victims, she only becomes emotionally involved with a few. Carmilla had nocturnal habits, but was not confined to the darkness. She had unearthly beauty, and was able to change her form and to pass through solid walls. Her animal alter ego was a monstrous black cat, not a large dog as in Dracula. She did, however, sleep in a coffin. Carmilla works as a Gothic horror story because her victims are portrayed as succumbing to a perverse and unholy temptation that has severe metaphysical consequences for them.[11]

Some critics, among them William Veeder, suggest that Carmilla, notably in its outlandish use of narrative frames, was an important influence on Henry James' The Turn of the Screw (1898).[12]

Although Carmilla is a lesser known and far shorter Gothic vampire story than the generally-considered master work of that genre, Dracula, the latter is heavily influenced by Le Fanu's novella. Stoker's posthumously published short story "Dracula's Guest" (1914), known as the deleted first chapter to Dracula, shows a more obvious and intact debt to Carmilla: 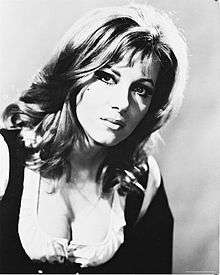