Missing and Murdered Indigenous Women in Canada is a social issue that has received a great deal of attention by the media and government. The exact number of Indigenous women that have gone missing or have been murdered in Canada over the past 30 to 40 years is in dispute, with some estimating 500 missing women,[1] and other citing statistics of 1100.[2] The Native Women's Association of Canada has gathered information on 582 cases, but believes the number of missing and murdered women are much higher.[3] There is no established criteria for determining when a case is included or excluded from these statistics.[4] Activists have argued that the proportion of indigenous women that are murdered are disproportionate to the overall proportion in the general population.[5]

Although Indigenous women and girls make up only 3% of the female population in Canada, they represent 10% of all female homicides in Canada. Since there is no National Database for missing people, it is difficult to make a comparison of the makeup of missing females in Canada.[6] There have been a number of databases that have been created in order to track the cases of missing and murdered Indigenous Women. For example, the Native Women's Association of Canada has information on 582 cases of missing and murdered Aboriginal women. Of these cases, 67% are murder victims, 20% are missing persons, 4% are suspicious deaths and 9% are unknown.

In late 2013, the Commissioner of the RCMP initiated a study of reported cases of missing and murdered indigenous women across all police jurisdictions in Canada. The report found that there were 1,181 incidents of female homicides and unresolved missing indigenous females.[7] Of these 1,181 incidents, there were only 225 unsolved cases between 1980 and 2012, and the majority of all female homicides are solved. There is little difference in solve rates of homicides between indigenous and non-indigenous victims.

Kristen Villebrun, a local activist in Hamilton Canada, and around ten other Indigenous women have been constructing inukshuks on the Chedoke Rail Trail.[8] This trail connects to the Chedoke Creek, a watercourse in Hamilton, Ontario, Canada. An inukshuk is a man-made stone structure commonly used for navigation or trail markers. Inukshuk translates to "in the likeness of a human".[9]

The women began the project in October, when they noticed that shadows cast by previously constructed inukshuks on the trail were lifelike and reminiscent of the missing women. These activists saw an opportunity to use these structures as a way of drawing attention to the issue of the missing women. They have constructed 1,181 inukshuks, working for six hours a day, four days a week.

The project has attracted many questions, with hundreds of people stopping to inquire about the inukshuks. The women have welcomed the questions, and they will continue to build the inukshuk women until they receive an official government-driven inquiry on the missing Indigenous women.[10]

Walking With Our Sisters

Walking With Our Sisters is a continual art installation, commemorating murdered or missing women and children from Indigenous communities. The project is community-led, from the creation of the piece, to the facilitation of the exhibit. The hope is to raise awareness on this issue and create a space for dialogue-based community discussions on this issue.

The art project is a collection of vamps from moccasins. A vamp is the extra layer of leather for the top lip of the moccasin. The installation has 1763+ pairs of adult vamps and 108 pairs for children. Each pair is authentic and custom made for each individual woman reported missing. The vamps represent the unfinished lives of the missing or murdered women.

The project began in 2012, with a call to action issued on the social media outlet, Facebook. People were being asked to design and create moccasin tops. By July 2013, 1,600 vamps were collected, more than tripling the initial goal of 600. Men, women, and children of all races responded to the call and became active in the project.

This floor installation travels to select galleries and art exhibition halls. Patrons are asked to take off their shoes and walk alongside the vamps, to ensure that they are not forgotten. People walk alongside them to show solidarity with these women. The installation is booked until 2019 and is scheduled for 25 locations across North America.[11]

This initiative is solely volunteer-based.

The REDress Project is an idea that has been designed to publicize the issue of missing or murdered Aboriginal women in Canada.[12] The project is based around the installation of a large collection of red dresses in public areas. The purpose of the project is to represent and offer a visual commemoration of the Aboriginal women that have gone missing or have been murdered.[13]

Jaime Black is the Metis multidisciplinary artist behind the project.[14] She is an artist and art educator from Winnipeg who seeks to create an opportunity for viewers to connect with the women being represented through her project.[15]

The first women’s memorial march initiated on February 14, 1991 in Downtown Eastside, Vancouver, and takes place annually on Valentine’s Day in more than twenty-two communities.[16] The march was an action in response to the murder of a Coast Salish woman.[16] The goal of the event was and continues to be to honour indigenous women who have been murdered and have gone missing for the purpose of increasing national inquiry and response. During the Vancouver march, the committee and public stop at the locations where the women were last seen or murdered for a moment of silence as a sign of respect.[17] The committee has drawn attention to the issue locally, nationally and internationally to bring awareness to the violence against indigenous women.[18] The committee is made up of family members, front line workers, close friends, and loved ones who have experienced the losses of indigenous women for several years.[16] 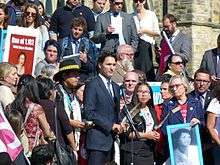 Prime Minister of Canada, Justin Trudeau, giving a speech on missing and murdered indigenous women in front of parliament in Ottawa in October 2016.

After the 2015 Canadian Federal Election, the Liberal Government upheld their campaign promise and announced the initiation of a National Inquiry on December 9, 2015.[19] The Canadian government had pre-inquiry meetings with a variety of people including families, front-line workers, the provinces and Indigenous organizations from December 2015 through February 2016, in order to determine how the inquiry will be structured. The mandate of the inquiry, the length of time of the inquiry, and the names of the commissioners, among them Michèle Audette, were published August 3, 2016. The estimated cost is $53.8 million. In addition, the government announced $16.17 million over four years to create family information liaison units in each province and territory.[20]