Mohsen Makhmalbaf (Persian: محسن مخملباف‎‎, Mohsen Makhmalbaaf; born May 29, 1957) is an Iranian film director, writer, film editor, and producer. He has made more than 20 feature films, won some 50 awards and been a juror in more than 15 major film festivals. His award-winning films include Kandahar; his latest documentary is The Gardener and latest feature The President.

Makhmalbaf's films have been widely presented at international film festivals in the past ten years. The director belongs to the new wave movement of Iranian cinema. Time selected Makhmalbaf's 2001 film Kandahar as one of the top 100 films of all time.[1] In 2006, he was a member of the Jury at the Venice Film Festival.

Makhmalbaf left Iran in 2005 shortly after the election of Mahmoud Ahmadinejad, sixth President of Iran, and has lived in Paris since the events of the 2009 Iranian presidential election.[2]

Makhmalbaf was born in Tehran on May 29, 1957. At the age of 15, he became involved in a militant group fighting against the rule of Mohammad Reza Pahlavi, the then Shah of Iran, and at the age of 17 he was imprisoned for stabbing a policeman and sentenced to death. After serving five years of his sentence, he was released in the wake of the Iranian Revolution.[3][4] He left Iran in 2005.[5]

Makhmalbaf is a major figure in Iranian cinema. His films have explored the relationship between the individual and a larger social and political environment. As a result, his work serves as an extended commentary on the historical progression of the Iranian state and its people. Makhmalbaf has worked in several genres, from realist films to fantasy and surrealism, minimalism, and large frescoes of everyday life, with a predilection (common to Iranian directors) for the themes of childhood and cinema.[6]

In 1981, he wrote the screenplay for Towjeeh, directed by Manuchehr Haghaniparast. In 1982, he wrote the screenplay for Marg Deegari, directed by Mohammad-Reza Honarmand. He made his first film, Tobeh Nosuh, in 1983, and Boycott, a film set in pre-revolutionary Iran, in 1985. The latter tells the story of Valeh (Majid Majidi), a young man sentenced to death for Communist tendencies, and is widely believed to be based on Makhmalbaf's own experiences.

Makhmalbaf portrays human despair, exploitation, and resilience in The Cyclist (1987),[7] a movie about Nasim, a poor Afghan refugee in Iran in desperate need of money for his ailing wife. Nasim agrees to ride a bicycle in a small circle for one week straight in return for the money he needs to pay his wife's medical bills.

Time of Love (1991) is Makhmalbaf's ninth feature film and the first film of what he calls his "third period".[8] It is a romantic trilogy that offers three variations of the same story.[9] 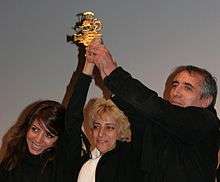 Hana, Marzieh and Mohsen Makhmalbaf, receiving the Cyclo d'Or at the Vesoul International Film Festival of Asian Cinema in 2009

Makhmalbaf directed Gabbeh in 1996. The film follows the nomadic Ghashghai people, whose bright, bold carpets tell stories. The main thread features a young woman who loves a mysterious stranger but is forbidden to marry him. The film is romantic and non-realistic, with events seeming to leap around in time and space, much like a dream.[10]

Makhmalbaf took time off from directing in 1996 to form the Makhmalbaf Film House, a school for young filmmakers. It quickly became a private production house for the increasing number of filmmakers in his family. In 1997, his 17-year-old daughter Samira directed The Apple, using him as a scriptwriter and editor. Makhmalbaf's wife, Marziyeh Meshkini, worked as assistant director to her daughter and then took up directing herself.[11]

Kandahar (2001) is a fictional odyssey inspired by a true story set in Afghanistan before the September 11 attacks, as the Taliban's laws strip women of civil rights and hope and a Western-cultured Afghan woman returns to prevent her sister's suicide during the last eclipse of the 20th century.[12]