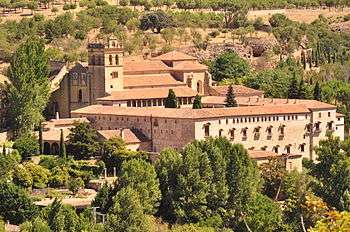 The monastery of Saint Mary of Parral (in Segovia, Spain).

Monastery of Saint Mary of Parral (Spanish: Monasterio de Santa María del Parral) is a Roman Catholic monastery of the enclosed monks of the Order of Saint Jerome just outside the walls of Segovia, Spain, founded by King Henry IV of Castile in 1454. Despite a generally irreligious life, Henry IV was finally buried in the sister-house of Monastery of Santa María de Guadalupe.

It was closed as part of the secularisation program of 1835, and its works of art were moved to the Monastery of La Trinidades at Atocha in Madrid between then and 1838. In the 1870s they were moved again to the Royal Gallery of El Prado in Madrid, where they were stored with little further research until some greater investigation took place between 2000 and 2003.

The Fountain of Grace

One work in particular, The Fountain of Grace (The Triumph of the Church over the Synagogue), listed in the Convent's Libero de Bercero (Vellum Book) as a gift of the King in 1454, was originally attributed to a follower of the School of Jan van Eyck, as it uses the same symbolic language and constructional forms as part of The Mystic Lamb polytych in Saint Bavo Cathedral in Ghent, Belgium. A 2003 exhibition lists the work as one which has had a major revision to its attribution, and there is some reason to suspect that it may have been a rushed copy of a lost original originally commissioned by Pope Eugene IV for a chapel in Brussels, possibly undertaken by Jan van Eyck during a diplomatic mission he undertook to the Iberian Peninsula in the 1430s.

Following a Papal Decree of 1925, the Hieronymite Order was re-established here in the following years and was finally granted its Rule in 1969.