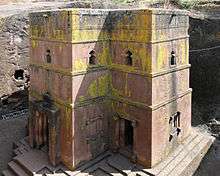 A monolithic church or rock-hewn church is a church made from a single block of stone. Because freestanding rocks of sufficient size are rare, such churches are usually hewn into the ground or into the side of a hill or mountain. They can be of comparable architectural complexity to constructed buildings.

The term "monolithic church" is most often used to refer to the complex of 11 churches in Lalibela, Ethiopia, believed to have been created in the 12th century. These churches are the Church of the Redeemer, of Saint Mary, of Mount Sinai, of Golgotha, of the House of the Cross, of the House of the Virgins, of Saint Gabriel, of Abba Matta, of Saint Mercurius, and of Immanuel. The most famous of the edifices is the cross-shaped Church of St. George (Beta Giyorgis). Tradition credits its construction to King Lalibela, who was a devout Christian. The medieval monolithic churches of this 12th-century 'New Jerusalem' are situated in a mountainous region in the heart of Ethiopia near a traditional village. Lalibela is an important center of Ethiopian Christianity, and even today is a place of pilgrimage and devotion. Lalibela is one of the world's precious heritages registered by UNESCO.

Many other churches were hewn from rock in Ethiopia, outside of Lalibela. This practice was very common in Tigray, where the outside world knew of only a few such churches until the Catholic priest Abba Tewelde Medhin Josief presented a paper to the Third International Conference of Ethiopian Studies in which he announced the existence of over 120 churches, 90 of which were still in use.[1] Despite Dr. Josief's death soon after his presentation, research over the next few years raised the total number of these rock-hewn churches to 153.[2] 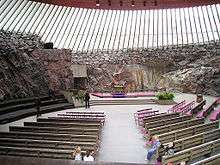 There are a number of monolithic churches elsewhere in the world. However, none have the free-standing external walls of the Lalibela churches. They instead more closely resemble cave monasteries in that they consist of tunnels converging into a single rock. Examples include:

This article is issued from Wikipedia - version of the 6/16/2015. The text is available under the Creative Commons Attribution/Share Alike but additional terms may apply for the media files.