Monte Carlo or Bust! is a 1969 British/French/Italian co-production comedy film, also known by its American title, Those Daring Young Men in Their Jaunty Jalopies. The story is based on the Monte Carlo Rally – first raced in 1911 – and the film recalls this general era, set in the 1920s. A lavish all-star film (Paramount put $10 million behind it), it is the story of an epic car rally across Europe that involves a lot of eccentric characters from all over the world who will stop at nothing to win.[2]

The film is a sequel to the 1965 hit Those Magnificent Men in their Flying Machines. Terry-Thomas appeared as Sir Cuthbert Ware-Armitage, the equally dastardly son of the Sir Percy Ware-Armitage, which Thomas had played in the earlier film. Some others of the cast from the first film returned, including Gert Fröbe and Eric Sykes. Like the earlier film, it was written by Ken Annakin and Jack Davies and directed by Annakin, with music by Ron Goodwin. The title tune is performed by Jimmy Durante. The credits sequence animation was the work of Ronald Searle, who was also featured in Annakin's earlier Those Magnificent Men in their Flying Machines. Tony Curtis and Susan Hampshire played other contestants in the race; Curtis also starred in the similar period-piece comedy The Great Race (1965) from Warner Bros.

The film was originally intended to be called Monte Carlo and All That Jazz. The American distributors Paramount Pictures re-titled it Those Daring Young Men in Their Jaunty Jalopies to tie it to Annakin's 1965 film; re-editing also meant cuts, up to a half-hour, from the original UK release.[3] 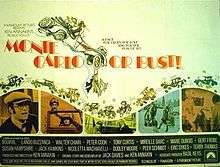 An international car rally in the 1920s attracts competitors from all over the world to compete in the Monte Carlo Rally. The arch rivals from England, Italy, France and Germany find that their greatest competition comes from the United States in the form of Chester Schofield (Tony Curtis), who had won half of an automobile factory in a poker game with the late father of baronet Sir Cuthbert Ware-Armitage (Terry-Thomas). Ware-Armitage has entered the race in a winner-take-all to exact revenge and win back the lost half of the company.

As the race begins, the contestants find that not only are they in a 1,500-mile battle with each other, but dangerous roads and the elements including a massive avalanche, are just as formidable. Chester and his new co-driver, Betty (Susan Hampshire) end up duelling with Cuthbert while the Italians are the winners of the rally but relinquish their prize to the French woman's team to help people injured in the snowslide. Various misfortunes plague each of the contestants, with Cuthbert, poised to win, being disqualified for cheating, the British Army team blowing up, the Germans being arrested and Chester falling asleep at the wheel. In the end, the Italians are declared the winners and share their winnings with the French girls. Chester does eventually cross the finish line, albeit due to Betty and some others pushing his car.

Annakin had difficulties working with his American screen idol, Tony Curtis, and considered him, "brittle, self-centered and a bully".[4] Curtis, however, enjoyed his time in Rome, one of the primary filming locations and became romantically linked to his co-star, Susan Hampshire.[5]

Besides the studio work at the Dino De Laurentiis Cinematografica Studios, Rome and Lazio, Italy, principal photography took place from 31 March–May 1968 at a large number of locations: England, Paris, France, Monaco, Monte Carlo, Monte Gelato Falls, Treja River, Italy and Åre, Jämtlands län, Sweden. Most of the exotic locations were from the second-unit directors while studio process shots mainly inserted the lead actors into the scenes.

An excerpt from composer Ron Goodwin's cue, "The Schickel Shamble" became the theme music for the long-running BBC Radio 4 comedy series I'm Sorry I Haven't a Clue which later featured Willie Rushton as a regular panellist.

Tony Curtis is driving an Alvis Speed 20 (1932–36) named the "Triple S, Six-Sylinder Special", and Gert Fröbe is in a Mercedes SSK (1928–32). Terry-Thomas's car first is a Ware-Armitage, while his official entry is in a "Nifty Nine, Mark II". The other British team is in a Lea-Francis, outfitted with an array of ingenious contraptions including the Dawlish Klaxon, the Dawlish Periscope, the Dawlish Snow Stoppers, the Dawlish Snow Melter, bits to turn it into the Dawlish Super Snow Tractor, Dawlish Extending Foglamp and rocket boosters. Marcelo and Angelo are in a Lancia Lambda, while Dominique drives a Peugeot 201 ... and lurking in the background are a bullnose Morris Oxford (1919–26) and a Blower Bentley (1927–31).[6]

Monte Carlo or Bust! was favourably received by audiences and critics alike. The comparison to Annakin's earlier work, notwithstanding, The New York Times review noted, "... the picture is lively and often hilarious, as the drivers hang on for dear life and the old cars honk, collide and careen. There is hardly a turn without a bang-up or a mix-up."[7]

In the opinion of the writer Matthew Sweet, Peter Cook as Major Dawlish, and Dudley Moore as Lt. Barrington, are the performers who have the humour in the film that survives best. Peter Cook's Major Dawlish is the creator of a series of fairly ludicrous inventions – the feeling hovers "that it might be all over for Britain."[8] Sweet states that it is a send-up of the British Empire, "which is very 1960s and not far from the sort of thing they would have been doing in The Establishment Club in Soho a few years earlier, where really for the first time, these upper-class stereotypes had been sent up with a vein of cruelty as well as a vein of affection. I think you can see it as a kind of post-Empire film." Cook and Moore play the representatives of Empire:

More recent reviews have not been as complimentary, with Leonard Maltin characterising it as mid-fare, "some funny scenes, but backfires a bit too often."[9]