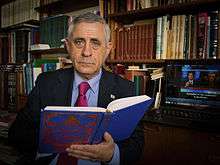 Kedar is an academic expert on the Israeli Arab population. He served for twenty-five years in IDF Military Intelligence, where he specialized in Islamic groups, the political discourse of Arab countries, the Arabic press and mass media, and the Syrian domestic arena.[1] The Los Angeles Times' Edmund Sanders described him as "one of the few Arabic-speaking Israeli pundits seen on Arabic satellite channels defending Israel".[2]

Since 2012, Kedar has promoted a Palestinian-Israeli peace plan referred to as the "Palestinian Emirates" or "Eight State Solution".[3]

According to Kedar, "The eight-state solution is based on the sociology of the Middle East, which has the tribe as the major corner stone of society. We should follow this characteristic of Middle Eastern culture as the basis for the Israeli-Palestinian solution." [4] He says that the Western-style nation-state structures imposed on regions inhabited by multiple tribes such as Iraq, Syria, Yemen and Libya are failed or failing, whereas states based on homogenous tribes such as the United Arab Emirates can succeed.

The eight Palestinian city-states would be the Gaza Strip, Jenin, Nablus, Ramallah, Jericho, Tulkarm, Qalqilya and the Arab part of Hebron, all of which he says possess traditional tribal leadership structures capable of transitioning to a self-governing emirate. Geographically, each emirate would govern its city and surrounding land. Each state could independently decide its own form of government, make its own laws, educate its own people, and print its own currency if it wishes; as well as have its own media, develop its own industry and commerce, or have its people find employment within Israel. This structure gives control and responsibility to local residents to decide their own future.[5]

Kedar says this proposal would result in self-governance and self-determination for the vast majority of Palestinian Arabs, with the remaining (sparsely populated) area of the West Bank to be annexed by Israel and its residents offered Israeli citizenship. As part of the arrangement, Israel would provide free passage of people and goods between each city-state and internationally. This proposal also satisfies Israeli security concerns, retaining strategic depth and minimizing the threat of rockets or terror tunnels.[6]

Mordechai Kedar said in June 2008, on Al Jazeera, that "Jerusalem belongs to the Jews, period" and also said - rightly - that Jerusalem was not mentioned in the Quran.[7][8]

Rape as weapon against terrorism

In July 2014, he said that threats to kill or imprison terrorists are an ineffective deterrent stating: "the only thing that deters them is if they know that their sister or their mother will be raped in the event that they are caught."[9][10][11] A further joint statement by Kedar and Bar-Ilan University further clarified his point, stating "...he did not call and is not calling to fight terror except by legal and moral means." and that Kedar "wanted to illustrate that there is no means of deterring suicide bombers, and using hyperbole, he gave the rape of women as an example. In order to remove all doubt: Dr. Kedar’s words do not, God forbid, contain a recommendation to commit such despicable acts. The intention was to describe the culture of death of the terror organizations. Dr. Kedar was describing the bitter reality of the Middle East and the inability of a modern and liberal law-abiding country to fight against the terror of suicide bombers."[12] Dr. Kedar wrote an article about this issue. On Rape, the Culture of Shame - and Radio Interviews

Mordechai Kedar is frequently invited to speak in public events and academic institutions in the US, Canada, Europe, Australia and other countries, including the U.K., where he spoke several times. However, in one case, in December 2014, a U.K. synagogue, Finchley United Synagogue, cancelled a speech by Kedar that had been organized through the local Zionist Federation. On the same week, scheduled appearances at three Jewish schools were cancelled after protests regarding his association with Pamela Geller, an anti-Muslim organizer from the U.S., who was banned from the U.K. last year. The cancellation was met with mixed reactions, with the federation chair saying this was an effort to besmirch Kedar's reputation, while political scientist Michael Pinto-Duschinsky claimed promoting Kedar in the U.K would be “toxic for interfaith relations”.[13]