Mother church architecturally represented in a mosaic of a fifth-century chapel floor (tomb marker/cover of a certain Valentia with the added invocation to rest in peace: Valentia in Pace). Bardo Museum, Tunis.

Mother church (Lat. Mater Ecclesiae) is a term, especially in Catholicism, depicting the Christian Church as a mother in its functions of nourishing and protecting the believer.[1] It may also refer to the mother church of a diocese i.e. Cathedral or a metropolitan church[2] The term has specific meanings within different Christian denominations.

This term is most often used among Roman Catholics as the Holy Mother Church or Sancta Mater Ecclesiae. The Church is considered to be a mother to its members because it is the Bride of Christ and all other churches have had their origin or derived their authority. Another term often used in Catechism in many pious Catholic countries is the title "Mater et Magistra" (Mother and Teacher), referencing its matrimonial espousement to Jesus Christ. It is used as "Designating the whole Christian Church or all Christians collectively."[3]

"Most Holy Lateran Church, of all the churches in the city and the world, the mother and head" ("Sacros[ancta] Lateran[ensis] eccles[ia] omnium urbis et orbis ecclesiarum mater et caput") Inscription on the façade of the Basilica of St. John Lateran (Rome). 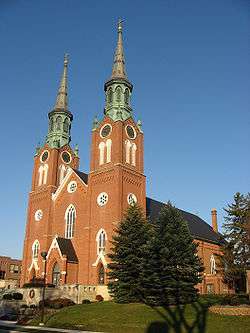 Mother church of the Missionaries of the Precious Blood in Minster, Ohio. 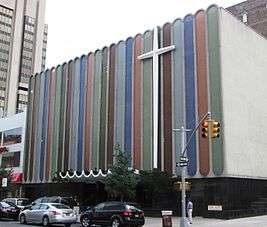 The Greater Refuge Temple in Harlem, New York City, the mother church of the Pentecostal Church of Our Lord Jesus Christ of the Apostolic Faith

Bingham in 1855 wrote: "Ecclesia matrix, a mother-church, is sometimes taken for an original church planted immediately by the Apostles, whence others were derived and propagated afterward. ... And in this sense the Church of Jerusalem is called 'the mother-church of all churches in the world.'" He also refers to "Arles the mother church of France, because supposed to be planted by the Apostle's missionary Trophimus, first bishop of the place." [8]

The first church built in a mission area is sometimes called the mother church. For example, the Cathedral of Our Lady of Peace in Honolulu, Hawai'i was the site of the first French Catholic mission of the Congregation of the Sacred Hearts of Jesus and Mary, from which the modern Hawai'i Catholic Church was established. Under these circumstances it is today considered the mother church of all Hawai'i.[9] Similarly, the Mission San Carlos Borromeo in Carmel, California is considered the mother church of California, as it historically served as the headquarters of the California mission system.

Mother church may also be a title of distinction based on a church's hierarchical importance. The church of the bishop of an episcopal see is often considered the mother church of the diocese. Holy Name Cathedral in Chicago, Illinois falls under this category. While it was not the first Roman Catholic cathedral of the city, it became the mother church due to the presence of the episcopal cathedra. This form of distinction based on hierarchical importance is usually used by the Roman Catholic Church, and, sometimes, the churches of the Anglican Communion,[10] while most Protestant denominations tend to refrain from using the title in this manner.

The Pope's cathedral, the Papal Archbasilica of Saint John Lateran, is called the mother church of all churches not only in the city of Rome but throughout the world.[11]

Principal church of a religious institute

The term may also relate to the churches of the various religious institutes, royal orders or civic orders. For example, Madonna Della Strada Chapel is the mother church of the Province of Chicago of the Society of Jesus. It is the principal church of the Jesuits in its particular province which includes Illinois, Indiana, Kentucky and Ohio.[12] On a broader scale, the Chiesa del Gesù in Rome is the mother church of all Jesuits throughout the world as it is the church of the order's Superior General.[11]

Another form of the phrase is mainly used in Protestant churches. A mother church is one from which other "daughter churches" were planted nearby. [13]

The oldest churches of various religious communities are often considered the mother churches to others that follow either in that same tradition or, alternatively, in a reformist tradition. A church's hierarchical importance is often derived from its historical importance in its organization. In addition, in communities where churches may change their ecclesiastical association or become independent (particularly in Pentecostal, charismatic and nondenominational churches in America), a mother church may have daughter churches in one or more organizations.

Mother Bethel A.M.E. Church in Philadelphia, Pennsylvania founded in 1794 is the "mother church" of the African Methodist Episcopal Church.

Greater Refuge Temple Church in New York City is the mother church of the Church of Our Lord Jesus Christ of the Apostolic Faith, an Apostolic Pentecostal denomination. As such, it is also ultimately the mother church of its various offshoot churches and organizations, including both Bible Way organizations and the Church of the Lord Jesus Christ and its daughter churches. In addition, churches that were independently founded by ministers who were ordained or directly influenced by the church's founder, Robert C. Lawson, or his spiritual successor, William L. Bonner, may also look to Greater Refuge Temple as their mother church, including the Progressive Church of Our Lord Jesus Christ, the Evangelistic Church of Christ, and many others.[15]

First Church of Christ, Scientist in Boston, Massachusetts, that of the Christian Scientists"; and "The church (i.e. organized body of Christians) of which another church or denomination is an offshoot; (also) the oldest or original church from which all others have sprung".[16]