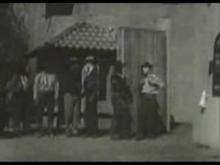 Mud and Sand is a silent film starring Stan Laurel, that was filmed in 1922. Laurel plays a matador who makes a fool of a famous Spanish dancer. The dancer demands revenge and, in the end, kills the matador by throwing a concealed brick at him after a fight with the fiercest bull in Spain. The moral of the story, shown in the last scene, is: "If you want to live long — and be happy — cut out the bull!" The title spoofs the Rudolph Valentino film Blood and Sand, and many scenes directly parody that film.

Media related to Mud and Sand (movie) at Wikimedia Commons