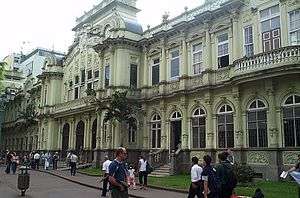 Edificio Correos (Spanish: "post office") is a major landmark and postal center of the city of San José, Costa Rica. Completed in 1917, it was designed by the foreign architect Luis Llach in an eclectic style, originally has a pea green colored facade and Corinthian style pilasters. The arch centerpiece contains angels bearing the Coat of arms of Costa Rica. The post office of the building is very busy on a daily basis as is the tourist office on the same floor. A statue of Juan Rafael Mora Porras stands opposite the building, who was president from 1850 to 1860.[1] 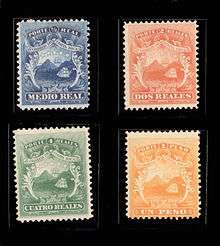 The Philatelic Museum is located on the second floor of the Correos building and was established in 1985. It contains a noted collection of Costa Rican stamps and postal history items in two rooms with the first room containing old telegraphic equipment and an office scenario. The museum has some rare stamps including the 1863 first Costa Rican stamps, and many stamps from Costa Rica and worldwide. The museum also organizes a stamp exchange fair once a month on a Saturday in which collectors gather to examine each other's collections and make possible exchanges.[1]