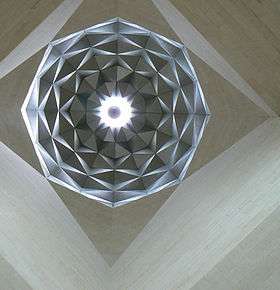 The Museum of Islamic Art (Arabic: متحف الفن الإسلامي‎‎, matḥaf al-fann al-islāmī) is a museum located on the Corniche in the Qatari capital Doha. The iconic building was designed by architect I. M. Pei.

A 290,000 m² park is located behind the main building. Facilities inside the 5-storey museum include a gift shop, a library, classrooms and a 200-seat theater.[1] There are also prayer rooms and ablution facilities inside the museum building for all Muslim visitors. Other facilities include IDAM, a high class restaurant offering French Mediterranean cuisine with Arabic elements.

The museum is influenced by ancient Islamic architecture, yet has a unique design. It was the first of its kind in the Arab States of the Persian Gulf and has a very large collection of Islamic art, plus a study and a library. Sabiha Al Khemir served as the founding director of the museum from 2006-2008.[2]

Occupying a total area of 45,000 m2, the museum is located on an artificial peninsula overlooking the south end of Doha Bay. Construction of the building by Baytur Construction Co. (Turkey) was completed in 2006. The interior gallery spaces were designed by a team led by JM Wilmotte of Wilmotte Associates. The museum was officially opened on November 22, 2008 by the emir of Qatar. [3] It then opened to the general public on December 8, 2008.[4][5]

The museum's architect was I. M. Pei. At the age of 91, Pei had to be coaxed out of retirement to undertake this enterprise. He traveled throughout the Muslim world on a six-month quest to learn about Muslim architecture and history and read Muslim texts to draw inspiration for his design.[6] Declining all proposed sites for the museum, Pei suggested a stand-alone island for the structure in order to avoid the encroachment of other buildings. It was built on a peninsula, approximately 195 feet (59 m) off the Doha Corniche and surrounded by a park.[6] Pei requested that the museum spaces be designed by his collaborator on the Louvre project, Wilmotte & Associates, who then assembled a design team including Plowden & Smith (conservation consultants), Isometrix Lighting + Design (lighting consultants), SG Conseil (AV Consultants) under Turner Projacs. Along with this design team, Leslie E. Robertson Associates was the structural engineer for the project.

The museum houses a collection of works gathered since the late 1980s, including manuscripts, textiles and ceramics. It is one of the world’s most complete collections of Islamic artifacts, with items originating in Spain, Egypt, Iran, Iraq, Turkey, India, and Central Asia.[7]