Founded in the US in 1935 by the Wise family as a publisher of sheet music and educational books, The Music Sales Group is today a major international independent copyright holder with over 500,000 titles in every genre.

The classical music companies within the Music Sales Group form the world’s largest independent holding of all genres of classical music and represent the music of many countries:

In 2015 the Music Sales Group acquired the substantial print business of the Italian publishing group Carisch and its 5,000-strong European catalogues specializing in pop and educational titles.[1]

Driven by the Schirmer family’s desire to boost appreciation of classical music in their adopted country (the site of the future Carnegie Hall was at the time still an apple orchard), Gustav bought out Beer’s interest in 1866 to establish G. Schirmer Music Publishers, Importers and Dealers.

By the start of the 20th century, G. Schirmer, Inc. was internationally renowned, not just for 18th and 19th century music but as a champion and publisher of contemporary works. In 1964 it acquired Associated Music Publishers (AMP), gaining a significant catalogue of American composers.

The company remained in the Schirmer family for just over a century before it was acquired by publishing giant Macmillan Inc. in 1968. The Music Sales Group then acquired both Schirmer and AMP from Macmillan in 1986 taking the imprint to new heights with the Hal Leonard Corporation acting as sole print distributor. 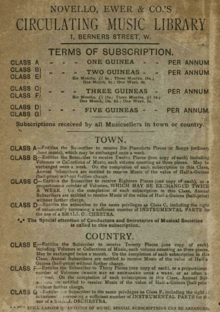 Novello & Company was established in London in 1811 by Vincent Novello in order to publish editions of his own church music. His son subsequently used it to establish a virtual monopoly in low-cost mass sales of choral music. Educational publishing came to constitute an important part of the Novello catalogue, which grew through further acquisitions and through the publication of the leading composers of the day such as Elgar and Holst. Novello joined the Music Sales Group in 1993 and today remains a major choral publisher and champion of new music. Novello composers also include Ernest John Moeran, Herbert Howells, Richard Rodney Bennett, Tarik O’Regan and Paul Mealor.[3]

Founded in the 1860s in Sussex, England, Chester Music at first imported and distributed classical editions from Europe. Under a new ownership it was the first to publish Stravinsky, Poulenc and Falla. Eventually it became part of The Music Sales Group where it flourished in educational publishing while adding many prestigious composers to its roster, among them Lutoslawski, Gorecki, Tavener, Nyman, Glass, Saariaho, Salonen, Muhly, Weir and Talbot.[4]

Edition Wilhelm Hansen was established in Copenhagen in 1857, an engraving business soon to be expanded into music publishing. Today, the company produces a variety of songbooks, educational books and CDs and is now the major supplier of printed music in its local territorty. it is the premier publisher of Scandinavian composers, including Nielsen and Sibelius as well as contemporary composers such as Abrahamsen, Nørgård, Sørensen and Ruders. It is owned by The Music Sales Group and managed in Denmark by the latest generation of the Wilhelm Hansen family.[5]

Éditions Alphonse Leduc is one of France’s oldest and most prestigious music publishing houses. Founded in 1841, it is still flourishing 175 years later and is now owned by The Music Sales Group. Today its catalogue includes the works of Jacques Ibert, Gabriel Fauré, Darius Milhaud, André Jolivet, Jacques Offenbach, Francis Poulenc, Olivier Messiaen and Henri Dutilleux among many others. As a result Éditions Alphonse Leduc has become the focal point for a whole tradition of French music through a combination of publishing new works and the acquisition of established catalogues, notably those of Éditions Heugel in 1980 and Éditions Hamelle in 1993.[6][7]

Based in Berlin, Bosworth Music has been part of the Music Sales Group since 1988. Established well over a century ago, today it prints and publishes a wide range of music including film scores, standards, pop and rock songs, and some of the most successful tutorial methods in the German printed music market. It has also built up a substantial catalogue of rights over the past decade.[8]

Unión Musical Ediciones was founded in 1900 and has been part of the Music Sales Group since 1990. Its catalogue includes a wealth of Spanish music with works by J. Rodrigo, Falla, Turina, Albeniz, Montsalvatge, Granados and Mompou. It also publishes the works of contemporary Spanish composers such as Joan Albert Amargos, Benet Casablancas and Alberto Iglesias, one of the greatest modern composers of film music.

Musicroom is the music retail division of the Music Sales Group in the UK and also the group’s online music store, Musicroom.com. With its slogan ‘everything for the musician’, musicroom.com offers the world's best selection of sheet music, books about music, tuition books, music software, musical instruments and accessories. In addition to printed music all stores also offer instant access to a virtual stockroom of some 45,000 pieces of sheet music any of which can be printed out in high quality, on demand.[9]

The site ships to over 300,000 customers in over 100 countries worldwide from a state-of-the-art, 150,000 square foot warehouse in Bury St. Edmunds, England.