Music of the Solomon Islands

The music of Solomon Islands has received international attention since before the country became independent from the United Kingdom in 1978. 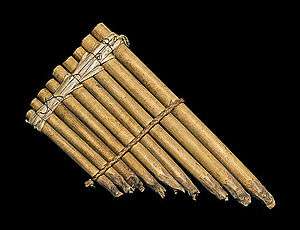 Traditional Melanesian music in the Solomon Islands includes both group and solo vocals, slit-drum and panpipe ensembles.[1] Panpipe orchestras, which are well-known on Malaita and Guadalcanal use up to ten performers with different instrument, each with unique tunings.[1]

In the 1920s bamboo music gained a following in several countries. Bamboo music was made by hitting open-ended bamboo tubes of varying sizes, originally with coconut husks.[1] After American soldiers brought their sandals to the Solomon Islands, these replaced coconut husks by the early 1960s, just as the music began spreading to Papua New Guinea.[2]

In the 1950s, Edwin Nanau Sitori composed the song "Walkabout long Chinatown", which was to become popular throughout the Pacific, and has been referred to by the government as the unofficial "national song" of the Solomon Islands.[3]

Modern Solomon Islander popular music includes various kinds of rock and reggae as well as something known as island music, a guitar and ukulele ensemble format influenced by Polynesian and Christian music.[4]

Traditional Melanesian choir singing features heavily in the soundtrack of the film The Thin Red Line, which is set against the backdrop of the Battle for Guadalcanal.

In 1969/1970, ethnomusicologist Hugo Zemp recorded a number of local songs which were released on an LP in 1973, as a part of the UNESCO Musical Sources collection. One of the songs, a lullaby named "Rorogwela", sung by Afunakwa, a Northern Malaita woman, was used as a vocal sample in a 1992 single "Sweet Lullaby" by the French electronica duo Deep Forest, becoming a worldwide hit, but also causing some controversy over perceived "pillaging" of the world music heritage by Western musicians.

There is a Wantok Music Festival.