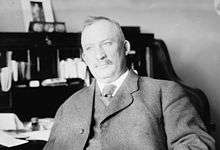 Rep. James Hay of Virginia, Chairman of the House Committee on Military Affairs.

The National Defense Act of 1916, Pub.L. 64–85, 39 Stat. 166, enacted June 3, 1916, was a federal law that updated the Militia Act of 1903, which related to the organization of the military, particularly the National Guard. The 1916 act included an expansion of the Army and the National Guard, the creation of an Officers' and an Enlisted Reserve Corps, and the creation of a Reserve Officers' Training Corps. The President was also given expanded authority to federalize the National Guard, with changes to the duration and the circumstances under which he could call it up. The Army began the creation of an Aviation arm, and the federal government took steps to ensure the immediate availability of wartime weapons and equipment by contracting in advance for production of gunpowder and other materiel.

The act was passed amidst the "preparedness controversy", after Pancho Villa's cross-border raid on Columbus, New Mexico and prior to U.S. entry into World War I. Its chief proponent was James Hay of Virginia, the Chairman of the House Committee on Military Affairs.[1]

Sponsored by the committee's ranking member, Julius Kahn of California and drafted by Hay, the 1916 law authorized an expanded Army of 175,000, and an enlarged National Guard of 450,000.[2]

The provision to establish the Reserve Officer Training Corps was advocated by a delegation from Ohio including William Oxley Thompson, President of the Ohio State University.[3] On February 7, 1916, Ralph D. Mershon, a graduate of Ohio State, testified before the Committee as a professional engineer. Present to testify as an advocate of a Reserve Engineers Corps, he expanded his remarks to argue in favor of the "Ohio Plan." Mershon noted (in bold):

"...the transformation that will take place in one term of drill in a man just off the farm and very clumsy when he enters college, and who at the end of a term is 'set up', carries himself well, looks neat in his uniform, and has acquired a measure of self-respect, and the respect of his colleagues, to an extent he would not have had without the military training."[4]

Congress agreed, and the ROTC provision was included in the final version of the law.[5][6]

The 1916 Act also authorized the National Guard to use federal funds to pay for 48 days of drill a year, as well as 15 days of annual training, an improvement over the previous authorization of five days of summer camp, with no federal funds for drills.[7]

The new law also made the Army's Division of Militia Affairs the expanded and reorganized Militia Bureau, which oversaw federal funding and other requirements for the National Guard in each state.[8]

The 1916 Act also allocated over $17 million for the Army to field 375 new airplanes, and created the Air Division to administer the Aviation Section, U.S. Signal Corps, which was based at Langley Field.[14]

The President also requested that the National Academy of Sciences establish the National Research Council to conduct research into the potential of mathematical, biological, and physical science applications for defense.[15]

As part of the debate over preparedness, Congress was concerned with ensuring the supply of nitrates (used to make munitions), so the 1916 Act authorized the construction of two nitrate-manufacturing plants, an industrial village, and a dam to provide them hydropower.[16] President Wilson chose Muscle Shoals, Alabama as the site of the dam.[17] Wilson Dam was later named for him, and the dam and nitrate plants built in Muscle Shoals were absorbed into the Tennessee Valley Authority in 1933.[18]

In 1940, Section 61 of the National Defense Act of 1916 was modified to allow the establishment of state defense forces.[23]