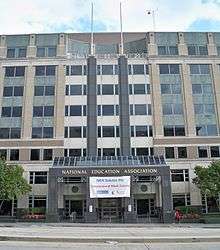 The National Education Association (NEA) is the largest labor union in the United States.[2] It represents public school teachers and other support personnel, faculty and staffers at colleges and universities, retired educators, and college students preparing to become teachers. The NEA has just under 3 million members and is headquartered in Washington, D.C.[1] The NEA had a budget of more than $341 million for the 2012–2013 fiscal year.[3] Lily Eskelsen García is the NEA's current president.[4]

The stated mission of the NEA is "to advocate for education professionals and to unite our members and the nation to fulfill the promise of public education to prepare every student to succeed in a diverse and interdependent world."[5]

The NEA, originally on the conservative side of U.S. politics, by the 1970s emerged as a factor in modern liberalism.[6] While the NEA has a stated position of "non-partisan", it typically supports the Democratic Party.[7] Conservatives, libertarians, and parents' rights groups have criticized the NEA's liberal positions.[8]

State affiliates of the NEA regularly lobby state legislators for funding, seek to influence education policy, and file legal actions.[9] At the national level, the NEA lobbies the United States Congress and federal agencies and is active in the nominating process for Democratic candidates.[10] From 1989 through the 2014 election cycle, the NEA spent over $92 million on political campaign contributions, 97% of which went to Democrats.[11]

The NEA has a membership of just under 3 million people.[12] The NEA is incorporated as a professional association in a few states and as a labor union in most. The group holds a congressional charter under Title 36 of the United States Code. It is not a member of the AFL–CIO, but is part of Education International, the global federation of teachers' unions.

NEA members set the union's policies through the Representative Assembly (RA). The RA, which is a delegation comprising elected representatives from each local and state affiliate, coalitions of student members and retired members, and other segments of the united education profession—is the primary legislative and policy-making body of the NEA.[13]

The executive officers of the NEA are Lily Eskelsen García (President), Rebecca Pringle (Vice President), and Princess Moss (Secretary-Treasurer). These three posts are elected by the Representative Assembly.[13][14]

The Board of Directors and Executive Committee are responsible for the general policies and interests of the NEA. The Board of Directors consists of one director from each state affiliate (plus an additional director for every 20,000 active members in the state), six directors for the retired members, and three directors for the student members. The board also includes at-large representatives of ethnic minorities, administrators, classroom teachers in higher education, and active members employed in educational support positions.[15]

The NEA was founded in Philadelphia in 1857 as the National Teachers Association (NTA).[16] Zalmon Richards was elected the NTA's first president and presided over the organization's first annual meeting in 1858.[17] The NTA became the National Education Association (NEA) in 1870 when it merged with the American Normal School Association, the National Association of School Superintendents, and the Central College Association.[18] The union was chartered by Congress in 1906.[17][19]

NEA officially merged with the American Teachers Association, the historically black teachers association originally founded as the National Association of Teachers in Colored Schools, in 1966.[20] 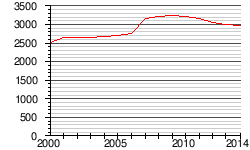 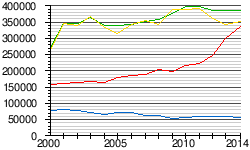 Before the 1960s, only a small portion of public school teachers were unionized. That began to change in 1959, when Wisconsin became the first state to pass a collective bargaining law for public employees.[23] Over the next 20 years, most other states adopted similar laws. The NEA reported a membership of 766,000 in 1961.[24]

In 2006, the NEA and the AFL–CIO also announced that, for the first time, stand-alone NEA locals as well as those that had merged with the AFT would be allowed to join state and local labor federations affiliated with the AFL-CIO.[28]

For most of the 20th century, the NEA represented the public school administration in small towns and rural areas. The state organizations played a major role in policy formation for the NEA. After 1957, the NEA reoriented itself to primarily represent the teachers in those districts, rather than just the administrators. It came to resemble the rival American Federation of Teachers (AFT), which was a labor union for teachers in larger cities. The success of the AFT in raising wages through strike activity encouraged the NEA to undertake similar activities. In the 1970s, more militant politics came to characterize the NEA. It created the NEA Political Action Committee to engage in local election campaigns, and it began endorsing political candidates who supported its policy goals. State NEA branches became less important as the national and local levels began direct and unmediated relationships. The NEA's elected leadership often supported teachers in opposition to school administrators.[31]

According to NEA's Department of Labor records since 2005, when membership classifications were first reported, the majority of the union's membership are "active professional" members, having fallen only slightly from 74% to the current 71%. The second largest category have been "active education support professional" members, with about 15%. The third largest category are "retired" members, which have grown from 8% to 10%. Two other categories, "active life" and "student" members, have both remained with around 2%, falling slightly. These categories are eligible to vote in the union, though the union lists some comparatively marginal categories which are not eligible to vote: "staff," "substitute" and "reserve" members, each with less than 1% of the union's membership. NEA contracts also cover some non-members, known as agency fee payers, which since 2006 have numbered comparatively about 3% of the size of the union's membership.[22][32]

Most NEA funding comes from dues paid by its members ($295 million in dues from a $341 million total budget in 2005).[33] Typically, local chapters negotiate a contract with automatic deduction of dues from members' paychecks. Part of the dues remain with the local affiliate (the district association), a portion goes to the state association, and a portion is given to the national association. The NEA returned 39 percent of dues money back to state affiliates in 2012-2013.[34]

Federal law prohibits unions from using dues money or other assets to contribute to or otherwise assist federal candidates or political parties, in accordance with their tax-exempt status. The NEA Fund for Children and Public Education is a special fund for voluntary contributions from NEA members which can legally be used to assist candidates and political parties. Critics have repeatedly questioned the NEA's actual compliance with such laws, and a number of legal actions focusing on the union's use of money and union personnel in partisan contexts have ensued.[35]

The NEA has taken positions on policy issues including:

The National Education Association headquarters located at 1201 16th Street near the White House.

NEA has played a role in politics since its founding, as it has sought to influence state and federal laws that would affect public education. The extent to which the NEA and its state and local affiliates engage in political activities, especially during election cycles, has been a source of controversy.[10]

The organization tracks legislation related to education and the teaching profession and encourages members to get involved in politics.[48]

In recent decades the NEA has increased its visibility in party politics, endorsing more Democratic Party candidates and contributing funds and other assistance to political campaigns. The NEA asserts itself as "non-partisan", but critics point out that the NEA has endorsed and provided support for every Democratic presidential nominee from Jimmy Carter to Barack Obama and has never endorsed any Republican or third party candidate for the presidency.[69]

Based on required filings with the federal government, it is estimated that between 1990 and 2002, eighty percent of the NEA's substantial political contributions went to Democratic Party candidates and ninety five percent of contributions went to Democrats in 2012.[70] the NEA maintains that it bases support for candidates primarily on the organization's interpretation of candidates' support for public education and educators. Every presidential candidate endorsed by the NEA must be recommended by the NEA's PAC Council (composed of representatives from every state and caucus) and approved by the Board of Directors by a 58 percent majority.[71] In October 2015, the NEA endorsed Hillary Clinton's 2016 presidential bid. Clinton accepted the endorsement in person.[72][73]

The NEA is a member of the U.S. Global Leadership Coalition.[74]

In September 2013, the NEA wrote an open letter to the United States House of Representatives opposing the Continuing Appropriations Resolution, 2014 (H.J.Res 59; 113th Congress).[75] The NEA urged representatives to vote no because the bill "continues the devastating cuts to education set in motion by the sequester and permanently defunds the Affordable Care Act."[75] The organization stated that they may decide to use the vote on this bill in their NEA Legislative Report Card for the 113th Congress.[75]

Some critics have alleged the NEA puts the interests of teachers ahead of students.[76] The NEA has often opposed measures such as merit pay, school vouchers, weakening of teacher tenure, certain curricular changes, the No Child Left Behind Act, and many accountability reforms.

With the modern scrutiny placed on teacher misconduct, particularly regarding sexual abuse, the NEA has been criticized for its failure to crack down on abusive teachers. From an Associated Press investigation, former NEA President Reg Weaver commented, "Students must be protected from sexual predators and abuse, and teachers must be protected from false accusations." He then refused to be interviewed.[77] The Associated Press reported that much of the resistance to report the problem comes from "where fellow teachers look away," and "school administrators make behind-the-scenes deals."[77]

Also criticized is the NEA's alleged "goal of changing public opinion on homosexuality, starting with the youngest generation,"[78] according to a former chairman of the NEA Ex-Gay Educators Caucus.[79][80][81] Some critics believe the NEA promotes a gay rights agenda, especially since the U.S. Ninth Circuit Court of Appeals 2005 case Fields v. Palmdale School District. The case originated when some Florida elementary school students were administered a school survey containing sexual questions. Parents, who had not been told the survey would contain questions of a sexual nature, brought the case forward.[82] The court in that case ruled that parents' fundamental right to control the upbringing of their children "does not extend beyond the threshold of the school door,"( a line specifically stricken from the record, 447 F.3d 1187) and that a public school has the right to provide its students with "whatever information it wishes to provide, sexual or otherwise."[83] NEA states that it does not "encourage schools to teach students to become gay, lesbian, bisexual, or transgendered (GLBT)," but the NEA does believe that "schools should be safe for all students and advocates that schools should raise awareness of homophobia and intervene when GLBT students are harassed."[84]

NEA has come under fire for taking advantage of laws in some states that compel, under certain conditions, membership in the association. In a case brought before the U.S. Supreme Court (Davenport v. Washington Education Association) on behalf of 4,000 Washington State teachers who are not NEA members but are nonetheless forced to pay NEA dues, the Court partially addressed the issue of collection and use of dues by unions such as the NEA.[85]

A leading critic of NEA from the left is Dr Rich Gibson, whose article on the NEA-AFT merger convention in Cultural Logic outlines a critique of unionism itself.[86]