The mission of the NIEHS is to "reduce the burden of human illness and disability by understanding how the environment influences the development and progression of human disease". NIEHS focuses on basic science, disease-oriented research, global environmental health, clinical research, and multidisciplinary training for researchers.

NIEHS researchers and grantees have shown the deadly effects of asbestos exposure, the developmental impairment of children exposed to lead and the health effects of urban pollution. This is the laboratory of the 1994 co-recipient of the Nobel Prize in medicine, Dr. Martin Rodbell. Here scientists that same year had a key role in identifying the first breast cancer gene, BRCA1, and, in 1995, identified a gene that suppresses prostate cancer. Here is where genetically altered mice have been developed—to improve and shorten the screening of potential toxins and to help develop aspirin-like anti-inflammatory drugs with fewer side effects.

The Institute funds centers for environmental health studies at universities across the United States. 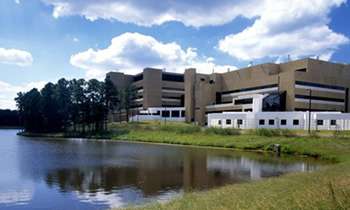 The NIEHS is one of 27 institutes and centers of the National Institutes of Health (NIH),which is a component of the Department of Health and Human Services (DHHS). NIEHS is located on 375 acres (1.52 km2) in Research Triangle Park (RTP), North Carolina. Its current Director is Dr. Linda Birnbaum, Ph.D., D.A.B.T., A.T.S., who is also concurrently the Director of the National Toxicology Program. The Deputy Director is Dr. Richard Woychik, Ph.D. The Director of the NIEHS reports to the Director of the NIH, of which the NIEHS is a member agency. Currently, Dr. Francis S. Collins, M.D., Ph.D., directs the NIH; he in turn reports to the Secretary of the DHHS, Sylvia Burwell.

NIEHS is composed of: