A naval air station is a military air base, and consists of a permanent land-based operations locations for the military aviation division of the relevant branch of a navy (Naval aviation). These bases are typically populated by squadrons, groups or wings, their various support commands, and other tenant commands.

The term "Naval Air Station" is used by many countries' navies, such as the United States Navy, the Royal Australian Navy, the British Royal Navy, and the Indian Navy.

In Australia, there is one Naval Air Station, "NAS Nowra", HMAS Albatross, and the formal Naval Aircraft Repair Yard and apprentice training establishment at HMAS Nirimba in Schofields, Sydney.

In 2016, the French Navy has four naval air stations (BAN), all located in metropolitan territory. 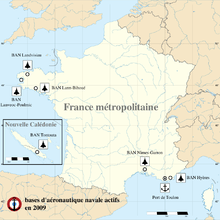 Active naval air stations of the French naval air arm (status 2009). Two of them were deactivated in 2011.

The BAN Tontouta was reassigned to Armée de l'Air (French Air Force) ; the BAN Nîmes-Garons (and not Nimes-Garron, as indicated by error on the map) is now assigned primarily to the civil aviation (air transport) and on a secondary basis to the Ministry of Interior for Civil Security.

Until 2006, the former served as the main operating base for the Royal Navy's Sea Harriers, which were based upon the three Invincible class aircraft carriers. However, upon the withdrawal of the BAe Sea Harrier in that year, no strike aircraft have operated from there. It is believed that all of their successors will be based at RAF Lossiemouth. The site also contains the Royal Naval Air Museum, that showcases a variety of aircraft from the Royal Naval Air Service (1914–1918) until the present day. RNAS Yeovilton also has RNAS Merryfield as its training and satellite station.

RNAS Culdrose serves a variety of helicopter and fixed-wing squadrons, such as the Sea King and the Jetstream respectively. Among the features at RNAS Culdrose is the "Dummy deck" which is used to train pilots to land on ships, the Merlin training facility, and the Fleet Requirements Air Direction Unit. Its satellite airfield is RNAS Predannack.

See also: List of air stations of the Royal Navy for past and present stations and Mobile Naval Air Bases for WWII support bases

The first naval air station in the United States was located at Greenbury Point, at the mouth of the Severn River near Annapolis, Maryland.