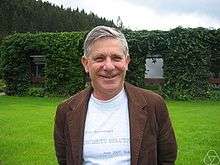 Neil Sidney Trudinger (born 20 June 1942, Ballarat, Victoria, Australia) is an Australian mathematician, known particularly for his work in the field of nonlinear elliptic partial differential equations. After completing his B.Sc at the University of New England (Australia) in 1962, he continued his graduate studies at Stanford University. He was awarded a Ph.D in 1966 for his thesis "Quasilinear Elliptical Partial Differential Equations in n Variables". After the award of his doctorate from Stanford University, Trudinger became a Courant Instructor at the Courant Institute of Mathematical Sciences of New York University during the academic year 1966-67. He then returned to Australia where he was appointed as a lecturer at Macquarie University in 1967. In 1970, he moved to University of Queensland where he was first appointed as a Reader, then as Professor. In 1973 he moved to the Australian National University.

He is co-author, together with his thesis advisor, David Gilbarg, of the book Elliptic Partial Differential Equations of Second Order.