New7Wonders of the World

This article is about the New7Wonders Foundation list. For other uses, see Wonders of the World. 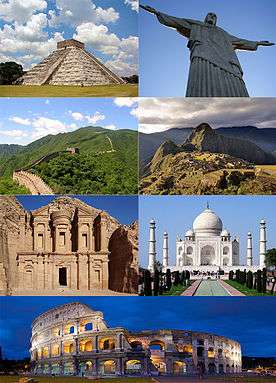 New7Wonders of the World (2000–2007) was an initiative started in 2000 to choose Wonders of the World from a selection of 200 existing monuments.[1] The popularity poll was led by Canadian-Swiss Bernard Weber and organized by the New7Wonders Foundation based in Zurich, Switzerland, with winners announced on 7 July 2007 in Lisbon.[2][3]

The New7Wonders Foundation claimed that more than 100 million votes were cast through the Internet or by telephone. Voting via the Internet was limited to one vote for seven monuments per person/identity, but multiple voting was possible through telephone.[4] Hence the poll was considered unscientific.[5] According to John Zogby, founder and current President/CEO of the Utica, New York-based polling organization Zogby International, New7Wonders Foundation drove "the largest poll on record".<ref name = "nwVFC"=/

The program drew a wide range of official reactions. Some countries touted their finalist and tried to get more votes cast for it, while others downplayed or criticized the contest.[3][5] After supporting the New7Wonders Foundation at the beginning of the campaign by providing advice on nominee selection, the United Nations Educational, Scientific, and Cultural Organization (UNESCO), by its bylaws having to record all and give equal status to world heritage sites, distanced itself from the undertaking in 2001 and again in 2007.[6][7]

The New7Wonders Foundation, established in 2001, relied on private donations and the sale of broadcast rights and received no public funding or taxpayers' money.[8] After the final announcement, New7Wonders said it didn't earn anything from the exercise and barely recovered its investment.[9]

Although N7W describes itself as a not-for-profit organization, the company behind it—the New Open World Corporation (NOWC)—is a commercial business. All licensing and sponsorship money is paid to NOWC.

The foundation has run two subsequent programs: New7Wonders of Nature, the subject of voting until 2011, and New7WondersCities, which wound up in 2014.[10]

Location of the New7Wonders winners

The Great Pyramid of Giza, largest and oldest of the three pyramids at the Giza Necropolis in Egypt and the only surviving (and oldest) of the original Seven Wonders of the Ancient World, was granted honorary status.

In 2007 the New7Wonders Foundation contracted a partnership with the United Nations in recognition of the efforts to promote the UN's Millennium Development Goals". The UN posted on its website:[11]

The New7Wonders campaigns aim to contribute to the process of uplifting the well being and mutual respect of citizens around the world, through encouraging interaction, expression opinion and direct participation by voting and polling on popular global issues which are understandable to everyone.
— United Nations Office of Partnerships

However, the United Nations Educational, Scientific and Cultural Organization (UNESCO), in a press release on June 20, 2007, reaffirmed that it has no link with the "private initiative". The press release concluded:[7]

There is no comparison between Mr. Weber's mediatised campaign and the scientific and educational work resulting from the inscription of sites on UNESCO's World Heritage List. The list of the 8 New Wonders of the World will be the result of a private undertaking, reflecting only the opinions of those with access to the Internet and not the entire world. This initiative cannot, in any significant and sustainable manner, contribute to the preservation of sites elected by this public.
— UNESCO

In Brazil there was a campaign Vote no Cristo (Vote for the Christ) which had the support of private companies, namely telecommunications operators that stopped charging voters to make telephone calls and SMS messages to vote.[12] Additionally, leading corporate sponsors including Banco Bradesco and Rede Globo spent millions of reals in the effort to have the statue voted into the top seven.[3] Newsweek reports the campaign was so pervasive that:[3]

One morning in June, Rio de Janeiro residents awoke to a beeping text message on their cell phones: "Press 4916 and vote for Christ. It's free!" The same pitch had been popping up all over the city since late January—flashing across an electronic screen every time city-dwellers swiped their transit cards on city buses and echoing on TV infomercials that featured a reality-show celebrity posing next to the city's trademark Christ the Redeemer statue.
— Elizabeth Dwoskin, Newsweek

According to an article in Newsweek, around 10 million Brazilians had voted in the contest by early July.[3] This number is estimated as the New7Wonders Foundation never released such details about the campaign. An airplane message, with a huge inscription "4916 VOTE FOR CHRIST" flew in Rio de Janeiro for a month.

An intensive campaign led by the Peruvian Ministry of Commerce and Tourism in Peru had a great impact in the media and consequently Peruvian people voted massively for its national wonder. The announcement of the new World Wonders generated great expectation and the election of Machu Picchu was celebrated nationwide.

The Chilean representative for Easter Island's Moais, Alberto Hotus, said Weber gave him a letter saying that the Moais had finished eighth and were morally one of the New Seven Wonders. Hotus said he was the only participant to receive such an apology.[13]

A campaign to publicize the Taj Majal in India gathered speed and it reached a climax in July 2007 with news channels, radio stations, and many celebrities asking people to vote for the Taj Mahal.

There was a campaign on the news programs to encourage people to vote for Chichen Itzá.

The other 13 finalists,[14] listed alphabetically, were: