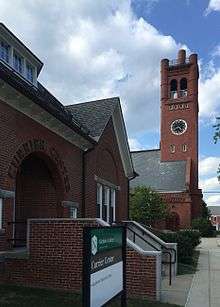 Nichols College is a private, four-year, not-for-profit, coeducational college located in Dudley, Massachusetts. Founded in 1815 as Nichols Academy, Nichols College offers twelve specializations in its business program, five majors in its liberal arts program, and an Educator Preparation Program for middle and secondary education. The College offers bachelor's and master's degrees as well as certificate programs.[3]

In a 2016 report, Payscale.com ranked Nichols College 13th nationally for business schools for Return on Investment (ROI) [4] and 7th in 2014.

Fels Student Center opened in 2012. Located at the center of the campus, the 30,000-square-foot Center houses student services, including the Center for Student Involvement, Residence Life and Career Services; a meeting space for student government and clubs; an alternative food service; and a student lounge, post office, bookstore and Nichols College radio station WNRC 97.5 FM. The Center features a classroom with a 35-foot LED scrolling stock ticker and web and video conferencing capability, giving students access to guest lecturers from around the world via audio or video.

The north campus consists of ten out of the twenty-two campus buildings. The southernmost part of this campus is Conrad Hall. The westernmost part of north campus is Conant Library. The Nichols north campus consists mostly of academic halls. Also located in the north campus are three of the oldest buildings at the Dudley campus, 1881-1885, Conant Library and Observatory, Academy Hall, and Conant Hall. The north campus is also home to the newest building on campus, which is an academic building that has distinctive design elements including a three-story lobby with a water feature, several breakout areas for studying, gathering, or group work, and a patio/garden that will bridge the academic building with Davis Hall and serve as the primary entrance for students.

The athletic complex is the focal point of the south campus. The complex includes Vendetti Field, a multipurpose turf field used for football and men’s and women’s lacrosse. The athletic complex also includes facilities for baseball, softball, tennis and soccer. In addition to the athletic field, the Athletic Center is used for indoor events and the Chalmers Field House for athletic training.

Photograph of Conant Hall circa 1838

The institution was originally founded in 1815 as Nichols Academy. The Academy’s founder was Amasa Nichols, a wealthy industrialist in Dudley, Massachusetts. Early benefactors of the Academy include textile manufacturers Samuel Slater and Hezekiah Conant. Nichols Academy closed its doors in 1909. Between 1909 and 1931, the Academy buildings were used by the town and leased to other educational entities over different periods of time.[9]

In 1931, James L. Conrad reorganized the school to Nichols Junior College of Business Administration and Executive Training, a two-year college, at the closed Nichols Academy location. Nichols Junior College’s purpose was to incorporate a new idea in education—a junior college for men only, and an institution where a student can secure a college education in business administration and executive training and at the same time enjoy the advantages of campus life. Its program of study was to combine courses in business education, similar to those offered in the third and fourth years of four-year colleges and universities, with necessary electives and selected cultural subjects. All of this occurred in a two-year format. In 1938, the Massachusetts State Department of Education authorized Nichols Junior College to award the Associate in Business Administration degree. Over time, the College purchased, constructed, and remodeled over forty-four buildings to shape most of the current campus that is seen today. [Source: book by James L. Conrad—Nichols: A College for the Hill, 1931-1996]

In 1980, Nichols established the Institute for American Values, later renamed the Robert C. Fischer Policy & Cultural Institute in 1999, as a department of the College providing a forum for the free exchange of ideas.[9]

In 2013, The Center for Women’s Leadership[10] was established with the goal of developing the leadership potential of female students, and serving as a resource and authoritative voice on women’s leadership for the community at large.

In 2014, the new Emerging Leaders program began with the introduction of the new LEAD101 class, and Nichols began a series of events to celebrate its bicentennial.

In 2011, Dr. Susan West Engelkemeyer became the second woman to hold the position of President of Nichols College and its seventh president. The president is the chief executive officer of the college and is responsible for the fulfillment of the college's mission.

The Athletic Department at Nichols College has a history of championship teams and has had a strong presence in New England Division III athletics.[11] In 2012, the women's tennis team achieved its third undefeated conference record for the regular season. In the 2012-13, men's tennis claimed its second consecutive Commonwealth Coast Conference (CCC) title. In 2014, men’s ice hockey won the Eastern College Athletic Conference (ECAC) Northeast Championship.[12]