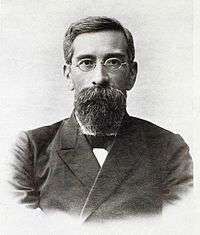 Nicodem Pavlovitch Kondakov was born in Russia in 1844, at Khalan village, Kursk Governorate. He attended Moscow University under Fedor Buslaev from 1861 to 1865.

After graduation he taught in the Moscow Art School.

In 1870 he became a lecturer in the University of Novorossia, Odessa (now Odessa National University, Ukraine), and in 1877 a professor there.

During the Revolution of 1917 and the Civil War in Russia Kondakov lived in Odessa and Yalta.

In 1920 he emigrated to Bulgaria, and then to Czechoslovakia, where he taught in Prague University until his death in 1925.

In his first book, on Greek manuscript illumination, published in 1877, Kondakov approached stylistic evolution of eastern Romanesque art through the use of artistic ideal. He collaborated with Salomon Reinach in Antiquités de la Russie Méridionale (1891). His lectures influenced future historians, among others, Michael Rostovtzeff. Kondakov wrote numerous works on the history of Ancient Greek, Russian, Georgian and Eastern Roman art. He founded modern method in the history of the art of the Eastern Roman Empire.