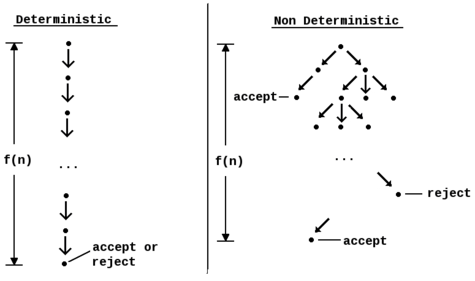 The notion was introduced by Robert W. Floyd.[1]

In computational complexity theory, nondeterministic algorithms are ones that, at every possible step, can allow for multiple continuations (imagine a man walking down a path in a forest and, every time he steps further, he must pick which fork in the road he wishes to take). These algorithms do not arrive at a solution for every possible computational path; however, they are guaranteed to arrive at a correct solution for some path (i.e., the man walking through the forest may only find his cabin if he picks some combination of "correct" paths). The choices can be interpreted as guesses in a search process.

A large number of problems can be conceptualized through nondeterministic algorithms, including the most famous unresolved question in computing theory, P vs NP.

Another is randomization, which consists of letting all choices be determined by a random number generator. The result is called a probabilistic deterministic algorithm.

The problem: given a natural number n larger than two, determine whether it is prime.

A nondeterministic algorithm for this problem is the following based on Fermat's little theorem:

If this algorithm returns the answer composite then the number is certainly not prime. If the algorithm returns the answer probably prime then there is a high probability that the number is prime, but a slight chance that it is composite. This is an example of a probabilistic nondeterministic algorithm, because it will not always return the same result given a particular input.[2]