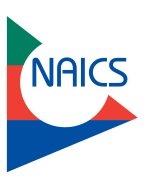 The North American Industry Classification System or NAICS (pronounced "nakes"[1]) is used by business and government to classify business establishments according to type of economic activity (process of production) in Canada, Mexico, and the United States of America. It has largely replaced the older Standard Industrial Classification (SIC) system; however, certain government departments and agencies, such as the U.S. Securities and Exchange Commission (SEC), still use the SIC codes.

An establishment is typically a single physical location, though administratively distinct operations at a single location may be treated as distinct establishments. Each establishment is classified to an industry according to the primary business activity taking place there. NAICS does not offer guidance on the classification of enterprises (companies) which are composed of multiple establishments.

NAICS is a collaborative effort by Mexico's Instituto Nacional de Estadística y Geografía (INEGI), Statistics Canada, and the United States Office of Management and Budget (OMB), through its Economic Classification Policy Committee (ECPC), staffed by the Bureau of Economic Analysis (BEA), the Bureau of Labor Statistics (BLS), and the Census Bureau. The system is designed to be largely compatible with the United Nations Statistical Office's International Standard Industrial Classification system (ISIC). NAICS versions are released every five years.

With the first version, released in 1997, NAICS offered enhanced coverage of the service sector, relative to SIC. The 2002 revision accommodated significant changes in the Information Sector. The 2012 revision slightly reduced the number of industries and modified six sectors.[3]

Analogues in other countries