Each April, a full week of natural beauty, big-name entertainment, festive galas, fun family events and Southern hospitality come together to showcase the charms of the Wilmington area. For community pride and springtime pageantry, the North Carolina Azalea Festival has no equal!

The Festival’s concerts, fairs and special events are attended by 300,000 people. More than 200,000 are estimated to attend the annual three-day Street Fair, while more than 100,000 gather to watch the Festival Parade. Each event is a celebration, beginning with the traditional arrival of Queen Azalea at the official opening of the five-day event. Stars glitter throughout town as Southern belles and their escorts promenade through lush gardens at the annual garden party. Everywhere the blooming azaleas offer colorful testimony to the rich heritage of coastal Carolina.

The Festival is a great source of local pride, with the entire community involved in displaying Wilmington to the world in its finest colors. More than 1,000 volunteers are required to stage over 50 events ranging from concerts to art shows, a street fair with interactive displays, home and garden tours, a parade, special exhibits, and a variety of other entertainment and events.

Staging the Azalea Festival – every year for almost seventy years – is a real community effort, and everyone who works on, participates in, or simply enjoys the Festival can be proud of these honors. They are a positive reflection on the greater Wilmington area as well.

The mission of the North Carolina Azalea Festival is to be nationally recognized as a showcase for our community’s rich array of artwork, gardens, history, and culture through recreational, educational and family-oriented events. The Festival encourages volunteerism and civic participation as it contributes to the region’s economy and promotes the unique qualities of Wilmington’s river-to-the-sea community.

The Azalea Festival began in 1948 as an idea of Dr. W. Houston Moore, M.D. Dr. Moore held a meeting in Wilmington's Chamber of Commerce with leading civil club representatives to discuss and begin planning for the first Azalea Festival.[1] The Festival would take place in April 1948 and would serve the purpose of showcasing the beauty of the local gardens such as Airlie Gardens, Orton Gardens, and Greenfield Gardens.

The following is a letter written by Mr. Morton to Gayle Ward in response to her request for information about the Festival beginnings:

Dr. W. Houston Moore, M.D., a wonderful old gentleman who lived in the 1800 block of Market Street, had been active through the Rotary Club in beautifying Greenfield Park with azaleas, dogwoods, and other flowering plants. In 1947 he decided to invite all of the leading civic clubs in Wilmington to send a representative to a meeting at the Chamber of Commerce in its building behind City Hall to discuss the feasibility of holding an Azalea Festival that would celebrate the beauty of Greenfield, Orton, Airlie and other gardens around town. I was sent by the Wilmington Jaycees as their representative to that first meeting.

There are probably minutes somewhere that list all of those who attended that first gathering. I can recall Henry Rehder, Wallace Murchison, Kenneth Sprunt, Star-News Editor John Hope and Paul T. Marshburn as being among ones who were particularly supportive of Dr. Moore’s idea.

I had a business trip that caused me to miss the second meeting of the somewhat informal Committee, but upon returning to town I was advised that I had been elected-selected President of the first Azalea Festival. I did my level best to talk my way out of that, but Dr. Moore was a persuasive and determined guy, and there were promises of support from all around the room from others on the Committee.

When the first Azalea Festival took place in April 1948 the gardens were at peak beauty, the weather was perfect, and the Festival cleared $5,000, a profit we knew we had to have or we would never see the second Festival. Our first, and absolutely Ideal Queen was Jacqueline White of RKO Radio Pictures. The top other celebrities were Ted Malone, who originated his coast-to-coast ABC Radio Network program from a platform in front of the Community Center on Second Street, and NC Governor R. Gregg Cherry, who crowned the Queen at Lumina Ballroom on Wrightsville Beach. The community was saddened when Dr. Moore died during the summer following the 1948 Festival, but the whole town was pleased to believe he died happy that the first Azalea Festival was a rousing success.

Many events have ebbed and flowed through the Azalea Festival Schedule of Events, including the Azalea Open Invitational where Arnold Palmer took home the title in 1957.

The first sidewalk show was held in 1953 and has continued as tradition since.[3]

The North Carolina Azalea Festival has over 50 events each year; many are free to the public and some are private functions for Festival dignitaries and sponsors. Regional media such as newspapers and television stations ensure wide coverage of all events which take place during the festival.

Airlie Gardens span 67 acres (270,000 m2) of Wilmington property and was created in 1901. The gardens are less than a mile from the ocean and are filled with all types of flora. Ownership of the Gardens has changed hands many times and has gone from being a 640-acre (2.6 km2) land grant from King George II in 1735 to a now comparably small 67-acre (270,000 m2) garden open for public viewing.[4] The garden showcases some of Wilmington’s finest land and flowers and is often used to host weddings because of its beauty and several attractive venues located within. The garden tours are available to the public and are a prominent stop in Wilmington for tourists. The tours include visits to several different areas of Airlie including the butterfly garden, a mystery grave, and the Minnie Evans Sculpture Garden which showcases the BottleChapel along with both metal and ceramic sculptures.[5] Along with tours, Airlie also has summer camps and educational programs available to the public.[6] 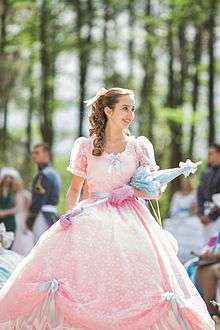 A tradition held by the Azalea Festival is the Belles. These young ladies serve as hostesses and guides to the gardens in the area. They wear antebellum attire and serve as a mark of the NC Azalea Festival. This tradition began in 1969 under Mrs. Harley Vance’s suggestion. Mrs. Harley Vance was the president of the Cape Fear Garden Club at that time.[7] The first year, seven girls played the role of Azalea Belles.[8] To become an Azalea Belle, one must apply for the position; however, precedence is given to those girls who are either daughters or granddaughters of Cape Fear Garden Club members. Girls from New Hanover County High School are next in line for receiving the honor of becoming a NC Azalea Belle.[7] If the Belle is not a member of the Cape Fear Garden Club, she may be “committee sponsored” by applying through the belle chairman.[9] New Azalea Belle policies were adopted in 2006. The number of belles needed for each year is dependent upon the size of the gardens in the tour and is determined by the belle chairman.[9] Also, a young lady may only serve as a Belle one year and may not be in the Azalea Festival Scholarship Pageant during the year that she serves as a belle.[9]

The North Carolina Azalea Festival has brought many known faces to the Wilmington area to serve as the Festival’s Queen. Queens arrive and are crowned during the first day of the festival. Past participants include:[3][10]