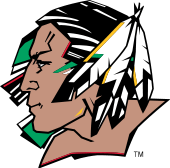 The controversial Sioux-head logo, retired at the beginning of 2012.

The "Fighting Sioux" nickname and logo was cited as one of the "hostile and abusive" representations of Native Americans by the NCAA in 2005, although some controversy predates that action. Critics of the name called it a racist stereotype, while supporters maintained that it was inoffensive and a source of pride. Over the years, the debate proved to be a divisive issue at the University. The movement to keep the nickname and logo was led by UND alumni, sports fans, and athletic players and officials, as well as (for a time) the university administration. The campaign to change the nickname and logo was led by several Native American tribes and student organizations, as well as many UND faculty members. A new nickname, the "Fighting Hawks" was selected in 2015.

In 1999, a bill was introduced in the North Dakota House of Representatives to eliminate the nickname, but the bill died in committee.[1] In 2000, twenty-one Native American-related programs, departments, and organizations at UND signed a statement opposing the continued use of the nickname and logo, saying that it did not honor them or their culture.[2]

Former Fighting Sioux hockey player and wealthy alumnus Ralph Engelstad donated $100 million for the construction of the Ralph Engelstad Arena. This is one of the largest philanthropic donations ever made to a public institution of higher learning. One of Engelstad's conditions for his donation was that the University keep the Fighting Sioux name indefinitely.[3] Engelstad placed thousands of Fighting Sioux logos in numerous places throughout the arena to make physical removal of the logo very costly if attempted.[4] The arena opened in 2001.

The debate reignited in 2005, following a decision by the NCAA to sanction schools with tribal logos and/or nicknames, including UND, that the NCAA deemed to be "hostile and abusive." The sanctions would not allow schools like UND to use their names or logos in post-season play and those schools would not be able to host post-season championships. After an unsuccessful appeal to reverse the sanctions, UND started to pursue its legal options.[5] On June 15, 2006, after consulting with North Dakota Attorney General Wayne Stenehjem, the Board of Higher Education elected 8-0 to authorize Stenehjem to sue the NCAA for penalizing the UND over its Fighting Sioux nickname and logo.[6] In November 2006, UND was granted a preliminary injunction to prevent the NCAA from enforcing the rule. On October 26, 2007, a settlement between UND and the NCAA was reached preventing the case from going to trial.[7] The settlement gave UND three years to gain support from the state's Sioux tribes to continue to use the Fighting Sioux nickname and logo.[8] If that support was not granted at the end of the three years, UND agreed to retire the Fighting Sioux nickname and logo, remove most of the existing Fighting Sioux imagery in campus facilities, and pick a new nickname and logo to represent UND's athletic teams.

On May 14, 2009, the North Dakota State Board of Higher Education approved a motion directing UND to retire "Fighting Sioux" nickname and logo, effective October 1, 2009, with full retirement to be completed no later than August 1, 2010. This directive was to be suspended, if, prior to October 1, 2009, the Standing Rock and Spirit Lake Sioux tribes gave namesake approval consistent with the terms of the Settlement Agreement. Spirit Lake voted to keep the name, but Standing Rock voted against.[9] On April 8, 2010, the Board unconditionally ordered UND to retire the Fighting Sioux nickname at the end of the 2010–11 season.[10]

On March 11, 2011, by a vote of 28-15, the North Dakota Senate approved legislation ordering the University of North Dakota to retain its controversial Fighting Sioux nickname and Indian-head logo. Governor Jack Dalrymple signed the Fighting Sioux bill into law the following week. This law was subsequently repealed during a special session of the legislature in November 2011, after the NCAA told state representatives that sanctions would be enforced.[13][14]

On November 1, 2011, the Spirit Lake Tribe filed a lawsuit against the NCAA in an attempt to reverse their policy against the use of American Indian imagery.[15] The lawsuit was thrown out in May 2012.[14]

On February 8, 2012, it was announced that supporters of the "Fighting Sioux" nickname received 17,213 signatures on a petition that sent the issue to a statewide vote in June. The university then resumed using the nickname.[16]

On March 1, 2012, in a letter sent to the University, the NCAA reiterated its current policies concerning participation in NCAA championships and stated that the school risks losing the right to play postseason games at home if its athletes, cheerleaders or band display the nickname "Fighting Sioux" or the American Indian head logo. In addition, since "NCAA policy requires that student-athletes, band, cheerleading, dance and mascot uniforms and paraphernalia not have hostile or abusive racial/ethnic/national original references", any UND teams participating in postseason games that do not adhere to this would risk forfeiture of the game and "the NCAA reserves its right to seek reimbursement for expenses incurred".[17][18]

On April 3, 2012, UND President Robert Kelley issued a statement warning about the negative consequences to UND if the statewide vote in June results in continued use of the nickname.[19]

On June 11, 2012, the naming issue was up for a statewide vote, on the ballot as Referendum Measure #4, to keep or retire the nickname. A sizable majority, 67.35%,[20] of North Dakota voters chose to retire the "Fighting Sioux" name and American Indian head logo.[21]

On June 14, 2012, the state Board of Higher Education voted to get rid of the University of North Dakota's moniker and Indian head logo. The university was prohibited from adopting a new team name until 2015.

On July 21, 2015, the university submitted five names options to be approved by UND president Robert Kelley to be put to a public vote, with the names being Fighting Hawks, Nodaks, North Stars, Roughriders, and Sundogs. The popular option of remaining merely "North Dakota" was dropped from the list.[22]

Up to 82,000 eligible voters, including students, alumni, university faculty and staff, donors and season-ticket holders, were able to cast online ballots October 19–23, 2015 to select the new UND nickname. The choices, selected by a committee from among hundreds of submitted names, are: Fighting Hawks, Nodaks, North Stars, Roughriders, and Sundogs. If one name does not get a majority vote, a run-off will be held between the two top choices. Results revealed that there were three finalists: Nodaks, Roughriders, and Fighting Hawks, with the latter topping the first vote, yet it did not receive the required majority.[23][24] Another run-off vote was required, with Fighting Hawks and Roughriders being the two finalists from the second vote. On November 18, 2015 it was revealed at a press conference held by President Robert Kelly that Fighting Hawks, with 57.24% of the vote, would become the new University Nickname. Use of the nickname was to begin immediately.[25][26]

A Kickstarter project was used to fund a documentary entitled "UNAUTHORIZED! The Story of the Fighting Sioux", reaching its $50,000 goal in less than a month.[27]

Local businesses are left to decide what to do with their "Fighting Sioux" decorations.[28] At hockey games, the new nickname has been greeted with booing, so its use is being avoided in the arena.[29] Resistance to the new nickname comes mainly from hockey fans, a substantial number of whom attend the games in their "Sioux" jerseys.[30] It has been decided that, in order to retain the trademark for the old name and logo, and prevent others from producing "Fighting Sioux" merchandise, the university must produce a limited series of items known as the "Dacotah Heritage Collection".[31]

A new logo, featuring a hawk head profile over "ND", has been approved and will be on the team helmets for the first football game September 1, 2016.[32] Objections to the logo from die-hard fans immediately followed.[33]

In spite of the change, students at rival North Dakota State University continue to chant "Sioux suck shit" whenever their football team makes a first down. The NDSU president, along with the presidents of the student body and faculty senates, have called for an end to the practice, which they describe as hateful, and coming from a misplaced sense of tradition.[34]