The Northern Court (北朝, hokuchō), also known as the "Ashikaga Pretenders" or "Northern Pretenders", were a set of six pretenders to the throne of Japan during the Nanboku-chō period from 1336 through 1392.[1] The present Japanese Imperial Family is descended of the Northern Court emperors.

The Northern dynasty is also referred to as the "senior line" or the Jimyōin line (持明院統, Jimyōin-tō); Jimyō-in was a temple and retirement residence of this line's emperors Go-Fukakusa and Fushimi.[2] 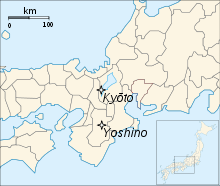 The Imperial seats during the Nanboku-chō period were in relatively close proximity, but geographically distinct. They were conventionally identified as:

The origins of the Northern Court go back to Emperor Go-Saga, who reigned from 1242 through 1246.[3] Go-Saga was succeeded in turn by two of his sons, Emperor Go-Fukakusa[4] and Emperor Kameyama.[5] On his death bed in 1272, Go-Saga insisted that his sons adopt a plan in which future emperors from the two fraternal lines would ascend the throne in alternating succession.[6] This plan proved to be unworkable, resulting in rival factions and rival claimants to the throne.

In 1333, when the Southern Emperor Go-Daigo staged the Kemmu Restoration and revolted against the Hojo Kamakura shogunate, the newly minted Shōgun Ashikaga Takauji (ironically, by Emperor Go-Daigo himself) responded by declaring Emperor Kōgon, Go-Daigo's second cousin once removed and the son of an earlier emperor, Emperor Go-Fushimi of the Jimyōin-tō, as the new emperor. After the destruction of the Kamakura shogunate in 1333, Kōgon lost his claim, but his brother, Emperor Kōmyō, and two of his sons were supported by the new Ashikaga shoguns as the rightful claimants to the throne. Kōgon's family thus formed an alternate Imperial Court in Kyoto, which came to be called the Northern Court because its seat was in a location north of its rival. Cloistered Emperor Go-Daigo failed to control succession to the Imperial throne, whereby the Ashikaga Shoguns were able to wrestle any remaining power away from position of Emperor. Shoguns would rule Japan unimpeded until 1867.

The Imperial Court supported by the Ashikaga shoguns was rivaled by the Southern Court of Go-Daigo and his descendants. This came to be called the Southern Court because its seat was in a location south of its rival. Although the precise location of the emperors' seat did change, it was often identified as simply Yoshino. In 1392, Emperor Go-Kameyama of the Southern Court was defeated and abdicated in favor of Kōgon's great-grandson, Emperor Go-Komatsu, thus ending the divide.

One Southern Court descendant, Kumazawa Hiromichi, declared himself to be Japan's rightful emperor in the days after the end of the Pacific War. He claimed that Emperor Hirohito was a fraud, arguing that Hirohito's entire line is descended from the Northern Court. Despite this, he was not arrested for lèse majesté, even when donning the Imperial Crest. He could and did produce a koseki detailing his bloodline back to Emperor Go-Daigo in Yoshino, but his claims and rhetoric failed to inspire anything other than sympathy.[7]

Go-Kameyama reached an agreement with Go-Komatsu to return to the old alternations on a ten-year plan. However, Go-Komatsu broke this promise, not only ruling for 20 years, but being succeeded by his own son, rather than by one from the former Southern Court.

During the Meiji period, an Imperial decree dated March 3, 1911 established that the legitimate reigning monarchs of this period were the direct descendants of Emperor Go-Daigo through Emperor Go-Murakami, whose Southern Court had been established in exile in Yoshino, near Nara.[8]

These are the Hokuchō or Northern Court emperors:

These are the Nanchō or Southern Court emperors: