"Nares" redirects here. For information about the nostrils of a bird, see Beak § Nares. For other uses, see Nares (disambiguation). 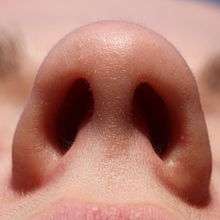 A nostril (or naris /ˈnɛərᵻs/, plural nares /ˈnɛəriːz/) is one of the two channels of the nose, from the point where they bifurcate to the external opening. In birds and mammals, they contain branched bones or cartilages called turbinates, whose function is to warm air on inhalation and remove moisture on exhalation. Fish do not breathe through their noses, but they do have two small holes used for smelling, which may, indeed, be called nostrils.

The Procellariiformes are distinguished from other birds by having tubular extensions of their nostrils.

In humans, the nasal cycle is the normal ultradian cycle of each nostril's blood vessels becoming engorged in swelling, then shrinking.

The nostrils are separated by the septum. The septum can sometimes be deviated, causing one nostril to appear larger than the other. With extreme damage to the septum and columella, the two nostrils are no longer separated and form a single larger external opening.

Like other tetrapods, humans have two external nostrils (anterior nares) and two additional nostrils at the back of the nasal cavity, inside the head (posterior nares, posterior nasal apertures or choanae). Each choana contains approximately 1000 strands of nasal hair. They also connect the nose to the throat (the nasopharynx), aiding in respiration. Though all four nostrils were on the outside the head of our fish ancestors, the nostrils for outgoing water (excurrent nostrils) migrated to the inside of the mouth, as evidenced by the discovery of Kenichthys campbelli, a 395-million-year-old fossilized fish which shows this migration in progress. It has two nostrils between its front teeth, similar to human embryos at an early stage. If these fail to join up, the result is a cleft palate.[1]

It is possible for humans to smell different olfactory inputs in the two nostrils and experience a perceptual rivalry akin to that of binocular rivalry when there are two different inputs to the two eyes.[2]