Nuclear ethics is a cross-disciplinary field of academic and policy-relevant study in which the problems associated with nuclear warfare, nuclear deterrence, nuclear arms control, nuclear disarmament, or nuclear energy are examined through one or more ethical or moral theories or frameworks.[1][2][3] In contemporary security studies, the problems of nuclear warfare, deterrence, proliferation, and so forth are often understood strictly in political, strategic, or military terms.[4] In the study of international organizations and law, however, these problems are also understood in legal terms.[5] Nuclear ethics assumes that the very real possibilities of human extinction, mass human destruction, or mass environmental damage which could result from nuclear warfare are deep ethical or moral problems. Specifically, it assumes that the outcomes of human extinction, mass human destruction, or environmental damage count as moral evils. Another area of inquiry concerns future generations and the burden that nuclear waste and pollution imposes on them. Some scholars have concluded that it is therefore morally wrong to act in ways that produce these outcomes, which means it is morally wrong to engage in nuclear warfare.[6] 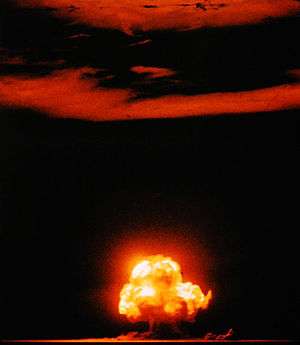 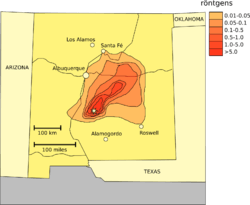 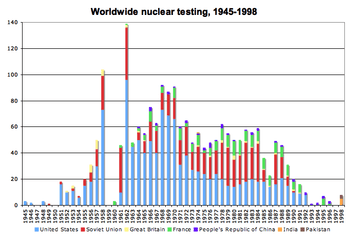 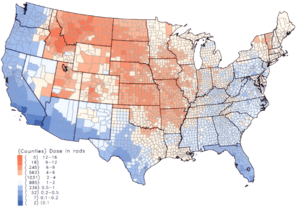 The application of nuclear technology, both as a source of energy and as an instrument of war, has been controversial.[10][11][12][13]

Even before the first nuclear weapons had been developed, scientists involved with the Manhattan Project were divided over the use of the weapon. The role of the two atomic bombings of the country in Japan's surrender and the U.S.'s ethical justification for them has been the subject of scholarly and popular debate for decades. The question of whether nations should have nuclear weapons, or test them, has been continually and nearly universally controversial.[14]

The public became concerned about nuclear weapons testing from about 1954, following extensive nuclear testing in the Pacific. In 1961, at the height of the Cold War, about 50,000 women brought together by Women Strike for Peace marched in 60 cities in the United States to demonstrate against nuclear weapons.[15][16] In 1963, many countries ratified the Partial Test Ban Treaty which prohibited atmospheric nuclear testing.[17]

Between 1949 and 1989, over 4,000 uranium mines in the Four Corner region of the American Southwest produced more than 225,000,000 tons of uranium ore. This activity affected a large number of Native American nations, including the Laguna, Navajo, Zuni, Southern Ute, Ute Mountain, Hopi, Acoma and other Pueblo cultures.[21][22] Many of these peoples worked in the mines, mills and processing plants in New Mexico, Arizona, Utah and Colorado.[23] These workers were not only poorly paid, they were seldom informed of dangers nor were they given appropriate protective gear.[24] The government, mine owners, scientific, and health communities were all well aware of the hazards of working with radioactive materials at this time.[25][26] Due to the Cold War demand for increasingly destructive and powerful nuclear weapons, these laborers were both exposed to and brought home large amounts of radiation in the form of dust on their clothing and skin.[27] Epidemiologic studies of the families of these workers have shown increased incidents of radiation-induced cancers, miscarriages, cleft palates and other birth defects.[28] The extent of these genetic effects on indigenous populations and the extent of DNA damage remains to be resolved.[29][30][31][32] Uranium mining on the Navajo reservation continues to be a disputed issue as former Navajo mine workers and their families continue to suffer from health problems.[33] 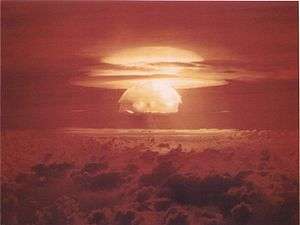 Over 500 atmospheric nuclear weapons tests were conducted at various sites around the world from 1945 to 1980. Radioactive fallout from nuclear weapons testing was first drawn to public attention in 1954 when the Castle Bravo hydrogen bomb test at the Pacific Proving Grounds contaminated the crew and catch of the Japanese fishing boat Lucky Dragon.[17] One of the fishermen died in Japan seven months later, and the fear of contaminated tuna led to a temporary boycotting of the popular staple in Japan. The incident caused widespread concern around the world, especially regarding the effects of nuclear fallout and atmospheric nuclear testing, and "provided a decisive impetus for the emergence of the anti-nuclear weapons movement in many countries".[17]

As public awareness and concern mounted over the possible health hazards associated with exposure to the nuclear fallout, various studies were done to assess the extent of the hazard. A Centers for Disease Control and Prevention/ National Cancer Institute study claims that fallout from atmospheric nuclear tests would lead to perhaps 11,000 excess deaths amongst people alive during atmospheric testing in the United States from all forms of cancer, including leukemia, from 1951 to well into the 21st century.[46][47] As of March 2009, the U.S. is the only nation that compensates nuclear test victims. Since the Radiation Exposure Compensation Act of 1990, more than $1.38 billion in compensation has been approved. The money is going to people who took part in the tests, notably at the Nevada Test Site, and to others exposed to the radiation.[48][49] 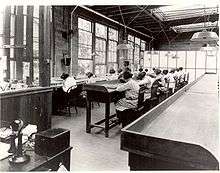 Nuclear labor issues exist within the nuclear power industry and the nuclear weapons production sector that impact upon the lives and health of laborers, itinerant workers and their families.[50][51][52] This subculture of frequently undocumented workers (e.g., Radium Girls, the Fukushima 50, Liquidators, and Nuclear Samurai) do the dirty, difficult, and potentially dangerous work shunned by regular employees.[53] When they exceed their allowable radiation exposure limit at a specific facility, they often migrate to a different nuclear facility. The industry implicitly accepts this conduct as it can not operate without these practices.[54][55]

Existent labor laws protecting worker’s health rights are not properly enforced.[56] Records are required to be kept, but frequently they are not. Some personnel were not properly trained resulting intheir own exposure to toxic amounts of radiation. At several facilities there are ongoing failures to perform required radiological screenings or to implement corrective actions.

Many questions regarding these nuclear worker conditions go unanswered, and with the exception of a few whistleblowers, the vast majority of laborers - unseen, underpaid, overworked and exploited, have few incentives to share their stories.[57] The median annual wage for hazardous radioactive materials removal workers, according to the U.S. Bureau of Labor Statistics is $37,590 in the U.S - $18 per hour.[58] A 15-country collaborative cohort study of cancer risks due to exposure to low-dose ionizing radiation, involving 407,391 nuclear industry workers showed significant increase in cancer mortality. The study evaluated 31 types of cancers, primary and secondary.[59]

Nuclear power may be a potential target for terrorists, and also increases the chances of nuclear weapons proliferation. Circumventing these problems involves cutting back on civil liberties, such as freedom of speech and assembly. So, Brian Martin says that "nuclear power is not a suitable power source for a free society".[60]

The Advisory Committee on Human Radiation Experiments (ACHRE) was formed on January 15, 1994 by President Bill Clinton. Hazel O"Leary, the Secretary of Energy at the U.S. Department of Energy called for a policy of "new openness", initiating the release of over 1.6 million pages of classified documents. These records revealed that since the 1940s, the Atomic Energy Commission was conducting widespread testing on human beings without their consent. Children, pregnant women, as well as male prisoners were injected with or orally consumed radioactive materials.[61]