Ohio in the War 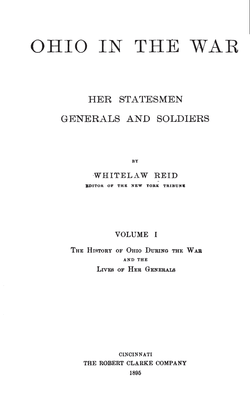 Ohio in the War: Her Statesmen, Generals, and Soldiers is a work of history of the U.S. State of Ohio during the American Civil War, written by Whitelaw Reid. It was first published in 1867, and re-printed in 1895. It is almost 2000 pages in two volumes. Preparations for the book began in 1863.[1]

Volume 1, The History of Ohio During the War and the Lives of her Generals, has 22 chapters of 272 pages on the home history of the state, followed by extensive biographies of General Ulysses S. Grant, Lieutenant General William T. Sherman, 20 Major Generals, 27 Brevet Major-Generals, 30 Brigadier-Generals, and numerous Brevet Brigadier-Generals. Following are chapters Our Heroic Dead, Tables of Staff Officers, etc., War Governors, etc., and an Index.[2] Volume 1 has 13 maps, 5 wood cuts, and 119 portraits.[3]