For the current use of the facility, see Harrisburg International Airport. 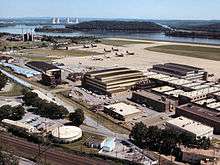 Olmsted Air National Guard Base – May 1979

The Pennsylvania Air National Guard facility is sited on the location of the former Olmsted Air Force Base, which was closed in 1969. The 193d Special Operations Wing operates EC-130J Hercules aircraft, designated as "Commando Solo" for special operations missions. The airfield is shared with MDT, the civilian airport being moved from Capital City Airport, near Harrisburg in 1970 after Olmsted AFB's closure.

Other components of the Wing are located at State College and at Muir Army Airfield at Fort Indiantown Gap.

The facility is named in honor of 1st Lieutenant Robert Sanford Olmsted, U.S. Army Air Service, on 11 March 1948. 1st Lieutenant Robert Sanford Olmsted was killed in a ballooning accident over the village Loosbroek, Netherlands on 23 September 1923, while competing in the Gordon Bennett Cup.[1][2][3] Despite threatening weather which caused some competitors to drop out. Lightning struck the S-6 over Nistelrode, the Netherlands, killing Olmsted.[4]

The facility saw its first military use by the United States Army Signal Corps in 1898. The first known use of the field by military aircraft was when Middletown Airfield opened in 1917 as a supply depot and maintenance center for Signal Corps aircraft.

The first airplanes landed in 1918 at Middletown Air Depot, when it was under the administration of the Signal Corps of the United States Army.[5] In 1939, it was still known by this name. Middletown had an abundance of engine and airframe shops and a supply distribution system that made it a significant facility, but a poor runway that, it was felt, would be too expensive to improve.[6] It would involve claiming marsh land and portions of the Susquehanna River (both of which have since been accomplished) and the Air Force leadership at that time determined that more land for supply and maintenance buildings was needed.[6]

After World War I, and the reconstitution of the United States Army Air Service in 1922, the facility became a logistics and maintenance support of Air Service aircraft and equipment through its host unit, the Middletown Air Depot (later Middletown Air Materiel Area). During World War II, numerous transport and reconnaissance units were organized and formed at Olmsted Army Airfield. Once equipped, they were reassigned to training bases.

During the 1948–1949 Berlin Airlift, the U.S. Supply Depot at Olmsted provided emergency support supplies for the airlift operations.[7]

Olmsted AFB and the Middletown Air Depot's last assignment was with Air Force Logistics Command (AFLC), and the base and depot were inactivated on 30 June 1969.

Initially turned over to Pennsylvania Air National Guard after active-duty closure, the flight line area was redeveloped into the Harrisburg International Airport, under the ownership of the Commonwealth of Pennsylvania.

In 1998, the Commonwealth of Pennsylvania transferred ownership of the airport to the Susquehanna Area Regional Airport Authority (SARAA).[5] In addition, in 1966, much of the former Air Force property was converted into The Pennsylvania State University—The Capital College, otherwise known as the Harrisburg Campus. This campus was originally chartered as a graduate and upper division school.

Known base operating units were: