Order of the Most Holy Redeemer

The Order of the Most Holy Redeemer (also known as Redemptoristines) are a Catholic female religious order. Their traditional habit is deep red, and the scapular and choir-mantle blue, on the scapular there is a coloured medallion of the Most Holy Redeemer. The 15 decade rosary hangs at the side bearing a medal upon one side of which are embossed the emblems of the Saviour's passion. The nuns wear two veils: one white and another black, folded back over the head, but which may be drawn forward over the face and as far as the medallion on the scapular. Some houses wear a modified habit of a red dress, a black veil and a medal of the Holy Redeemer on one side and St. Alphonsus on the other that is suspended on a chain. 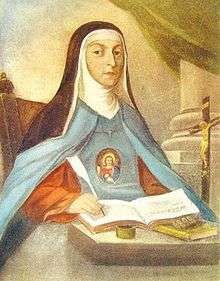 The cradle of the Redemptoristines is Scala, not far from Amalfi, Italy. Father Thomas Falcoia, of the Congregation Pii Operarii, formed a community of nuns there and gave them a rule. Later he became Bishop of Castellammare.

He was director of Alphonsus Liguori when a new rule was approved by Benedict XIV in 1750 and was said to have been revealed to Sister Maria Celeste Crostarosa.

The bishop favoured the rule and asked Alphonsus to give the nuns the spiritual exercises and to organize the community as he judged best. Alphonsus set up observance of the new rule by meditation on the life and virtues of Christ. The details of their daily life were to commemorate phases of His life. Zeal was to be exercised by prayer, each day of the week being devoted to an object affecting the well-being of the Church, They were to pray in a special manner for the apostolic works of the Redemptorists.

The institute began on 23 May 1731. A second monastery was founded by Alphonsus, when bishop, in his episcopal city, Sant'Agata de' Goti. The rule was approved by Pope Benedict XIV in 1750.

Nearly a hundred years after the foundation at Scala, Joseph Passerat sent two ladies, Mlle. Eugénie Dijon and the Countess Welsersheim, to Sant'Agata dei Goti to learn the rule and spirit of the Redemptoristines. They received the habit at Rome from Cardinal Odescalchi. They founded houses at Vienna and Bruges. Convents of the institute now exist in Austria, Bavaria, Belgium, France, the Netherlands, Ireland, England, Tyrol, Spain, Canada, the United States and Brazil.

In Sao Fidelis, Brazil, there still exists a traditional monastery[1] of the Redemptoristines that continues the original Rules and Constitutions with the approval of the Holy See.