As a major national security site, the plant and its grounds are strictly controlled and off-limits to all civilians, and the airspace above and around the plant is prohibited to civilian air traffic by the FAA as Prohibited Area P-47.

Conventional weapons being assembled at Pantex in 1944

Bunkers at Pantex used for temporary staging of nuclear weapons.

The Pantex Plant was originally constructed as a conventional bomb plant for the United States Army during the early days of World War II. The Pantex Ordnance Plant was authorized February 24, 1942. Construction was completed on November 15, 1942 and workers from all over the U.S. flocked to Amarillo for jobs.

Pantex was abruptly deactivated when the war ended and remained vacant until 1949, when Texas Technological College in Lubbock (now Texas Tech University) purchased the site for $1.[3] Texas Tech used the land for experimental cattle-feeding operations.

In 1951, at the request of the Atomic Energy Commission (now the National Nuclear Security Administration (NNSA)), the Army exercised a recapture clause in the sale contract and reclaimed the main plant and 10,000 acres (40 km2) of surrounding land for use as a nuclear weapons production facility. The Atomic Energy Commission refurbished and expanded the plant at a cost of $25 million. The remaining 6,000 acres (24 km2) of the original site were leased from Texas Tech in 1989. 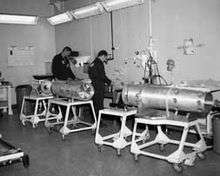 Labor troubles arose in 2007 following the implementation of stricter physical and performance requirements for armed security personnel following the September 11th attacks. The worker's union for the Pantex guards protested that the new standards were unfairly strenuous to middle-aged personnel nearing retirement.[12] In protest 500 guards walked off the job and went on strike in April 2007 and were replaced with a temporary guard force.[13] The strike ended with a negotiated settlement after 34 days. Guards also went on strike in a pay dispute in 1981, and unionized production and maintenance workers struck in 1970 and 2015. [14]

The plant was put on lockdown in January 2010 when a Pantex lab worker reported seeing two men wearing camouflage and carrying rifles exit a vehicle a "couple of miles" from the plant. The men were found to be employees on their day off, goose hunting on private property. No charges were filed.[15]