This article is about a procession. For other uses, see Parade (disambiguation).
"Parading" redirects here. For the racehorse, see Parading (horse).

2013 World Championships in Athletics parade of nations at the Luzhniki Stadium in Moscow, Russia.

A parade (also called march or marchpast) is a procession of people, usually organized along a street, often in costume, and often accompanied by marching bands, floats or sometimes large balloons. Parades are held for a wide range of reasons, but are usually celebrations of some kind. In Britain the term parade is usually reserved for either military parades or other occasions where participants march in formation; for celebratory occasions the word procession is more usual. In the Canadian Forces the term also has several less formal connotations.[1]

Protest demonstrations can also take the form of a parade, but such cases are usually referred to as a march instead.

The parade float got its name because the first floats were decorated barges that were towed along canals with ropes held by parade marchers on the shore. Floats were occasionally propelled from within by concealed oarsmen, but the practice was abandoned because of the high incidence of drowning when the lightweight and unstable frames capsized. Strikingly, among the first uses of grounded floats — towed by horses — was a ceremony in memory of recently drowned parade oarsmen. Today, parade floats are traditionally pulled by motor vehicles or powered themselves.

Since the advent of such technology, it became possible for aircraft and boats to parade. A flypast is an aerial parade of anything from one to dozens of aircraft, both in commercial context at airshows and also to mark, e.g., national days or significant anniversaries. They are particularly common in the United Kingdom, where they are often associated with Royal occasions. Similarly, for ships, there may be a sail-past of, e.g., tall ships (as was seen during Trafalgar 200) or other sailing vessels as during the celebrations of the 60th anniversary of World War II.

The longest parade in the world is the Hanover Schützenfest that takes place in Hanover every year during the Schützenfest. The parade is 12 kilometres long with more than 12,000 participants from all over the world, among them more than 100 bands and around 70 floats and carriages. 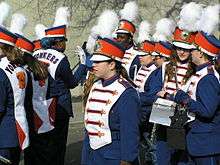 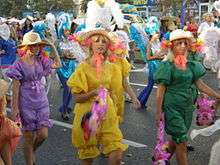 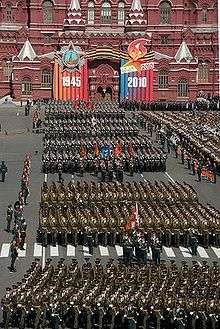 At the end of hostilities in Europe in 1944-45, "victory parades" were a common feature throughout the recently liberated territories. For example, on 3 September 1944, the personnel of the 2nd Canadian Infantry Division marched six abreast to the music of massed regimental pipe and drum bands through the streets of Dieppe, France to commemorate the liberation of the city from German occupation, as well as commemorate the loss of over 900 soldiers from that formation during the Dieppe Raid two years earlier.[2] On the Moscow Victory Parade of 1945 held in Moscow, Soviet Union in June 1945, the Red Army commemorated Victory in Europe with a parade and the ceremonial destruction of captured Wehrmacht and Waffen-SS standards.

A kiddie parade at a Municipal Band concert in Eau Claire, Wisconsin 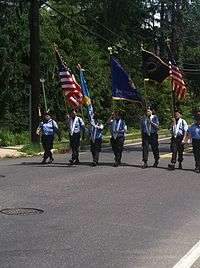