Paso de los Libres is a city in the east of the province of Corrientes in the Argentine Mesopotamia. It had about 44,000 inhabitants at the 2001 census [INDEC], and is the head town of the department of the same name. 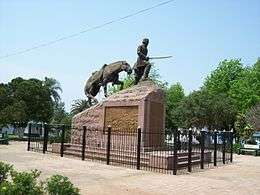 Monument to General Joaquín Madariaga and the 108 Valiants.

The city lies on the right-hand (western) shore of the Uruguay River, opposite the city of Uruguaiana, Rio Grande do Sul, Brazil, to which it is joined by a road and railway bridge (Paso de los Libres-Uruguaiana International Bridge). The area is served by Paso de los Libres Airport.

This article is issued from Wikipedia - version of the 9/13/2015. The text is available under the Creative Commons Attribution/Share Alike but additional terms may apply for the media files.