Patrick Ronayne Cleburne (/ˈkleɪbɜːrn/ KLAY-burn; March 17, 1828 – November 30, 1864)[1] was an Irish-born American soldier, best known for his service in the Confederate States Army during the American Civil War, where he rose to the rank of major general.[2]

Born in County Cork, Ireland,[1] Cleburne served in the 41st Regiment of Foot, a Welsh regiment of the British Army, after failing to gain entrance into Trinity College of Medicine in 1846. He emigrated to the United States three years later. At the beginning of the Civil War, Cleburne sided with the Confederate States. He progressed from being a private soldier in the local militia to a division commander. Cleburne participated in many successful military campaigns, especially the Battle of Stones River, the Battle of Missionary Ridge and the Battle of Ringgold Gap. His strategic ability gained him the nickname "Stonewall of the West". He was killed in 1864, at the Battle of Franklin.

Cleburne was born in Ovens, County Cork, Ireland, the second son of Dr. Joseph Cleburne, a middle-class physician of Anglo-Irish ancestry. Patrick's mother died when he was 18 months old, and he was an orphan at 15. He followed his father into the study of medicine, but failed his entrance exam to Trinity College of Medicine in 1846. In response to this failure, he enlisted in the 41st Regiment of Foot of the British Army, subsequently rising to the rank of corporal.[3]

Three years later, Cleburne bought his discharge and emigrated to the United States with two brothers and a sister. After spending a short time in Ohio, he settled in Helena, Arkansas, where he was employed as a pharmacist and was readily accepted into the town's social order.[3] During this time, Cleburne became close friends with Thomas C. Hindman, who would later parallel his course as a Confederate Major General. The two men also formed a business partnership with William Weatherly to buy a newspaper, the Democratic Star, in December 1855.

In 1856, Cleburne and Hindman were both wounded by gunshots during a street fight in Helena with members of the Know-Nothing Party following a debate. Cleburne was shot in the back, turned around and shot one of his attackers, killing him. The attackers hid until Cleburne collapsed on the street and then left. After the two recovered, they appeared before a grand jury to respond to all charges brought against them. They were exonerated and, afterward, went to Hindman's parents' house in Mississippi.[4] By 1860, he was a naturalized citizen, a practicing lawyer, and very popular with the local residents.[5]

Service in the Confederate Army

When the issue of secession reached a crisis, Cleburne sided with the Southern states. His choice was not due to any love of slavery, which he claimed not to care about, but out of affection for the Southern people who had adopted him as one of their own. As the crisis mounted, Cleburne joined the local militia company (the Yell Rifles) as a private soldier. He was soon elected captain.[4] He led the company in the seizure of the U.S. Arsenal in Little Rock in January 1861. When Arkansas left the Union, the Yell Rifles became part of the 1st Arkansas Infantry, later designated the 15th Arkansas, of which he was elected Colonel. He was promoted to brigadier general on March 4, 1862.[4] 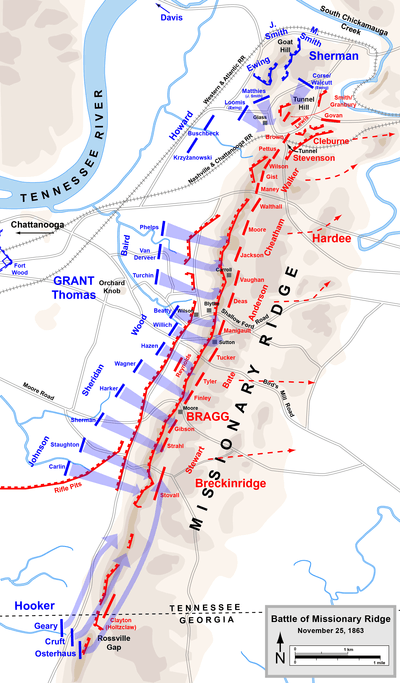 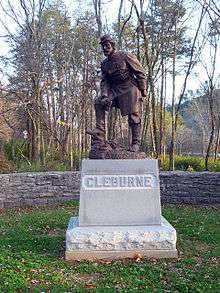 Cleburne served at the Battle of Shiloh and the Battle of Richmond (Kentucky), where he was wounded in the face when a minie ball pierced his left cheek, smashed several teeth, and exited through his mouth, recovering in time to participate in the Battle of Perryville.[6][7] After the Army of Tennessee retreated to its namesake state in late 1862, Cleburne was promoted to division command and served at the Battle of Stones River, where his division advanced three miles as it routed the Union right wing and drove it back to the Nashville Pike and its final line of defense. He was promoted to major general on December 13.[2]

During the campaigns of 1863 in Tennessee, Cleburne and his soldiers fought at the Battle of Chickamauga. At the Battle of Wauhatchie near Chattanooga they conducted a rare night assault. They successfully resisted a much larger Union force under Maj. Gen. William T. Sherman on the northern end of Missionary Ridge during the Battle of Missionary Ridge, and Joseph Hooker at the Battle of Ringgold Gap in northern Georgia, in which Cleburne's men again protected the Army of Tennessee as it retreated to Tunnel Hill, Georgia. Cleburne and his troops received an official Thanks from the Confederate Congress for their actions during this campaign.[6]

Cleburne's strategic use of terrain, his ability to hold ground where others failed, and his talent in foiling the movements of the enemy earned him fame, and gained him the nickname "Stonewall of the West." Federal troops were quoted as dreading to see the blue flag of Cleburne's Division across the battlefield.[8] General Robert E. Lee referred to him as "a meteor shining from a clouded sky".[9]

By late 1863, it had become obvious to Cleburne that the Confederacy was losing the war because of the growing limitations of its manpower and resources.[10] In 1864, he dramatically called together the leadership of the Army of Tennessee and put forth the proposal to emancipate slaves and enlist them in the Confederate Army to secure Southern independence.[11][12] His plan did not include black equality, suggesting that legislation and foresight would ensure relations between blacks and whites would not materially change.[13] This proposal was met with polite silence at the meeting, and while word of it leaked out, it went unremarked, much less officially recognized.[10] From his letter outlining the proposal:[14]

Satisfy the negro that if he faithfully adheres to our standard during the war he shall receive his freedom and that of his race ... and we change the race from a dreaded weakness to a position of strength.

Will the slaves fight? The helots of Sparta stood their masters good stead in battle. In the great sea fight of Lepanto where the Christians checked forever the spread of Mohammedanism over Europe, the galley slaves of portions of the fleet were promised freedom, and called on to fight at a critical moment of the battle. They fought well, and civilization owes much to those brave galley slaves ... the experience of this war has been so far that half-trained negroes have fought as bravely as many other half-trained Yankees.

It is said that slavery is all we are fighting for, and if we give it up we give up all. Even if this were true, which we deny, slavery is not all our enemies are fighting for. It is merely the pretense to establish sectional superiority and a more centralized form of government, and to deprive us of our rights and liberties. 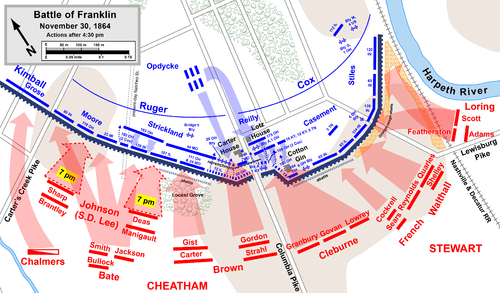 Prior to the campaigning season of 1864, Cleburne became engaged to Susan Tarleton of Mobile, Alabama.[15] Their marriage was never to be, as Cleburne was killed during an ill-conceived assault (which he opposed) on Union fortifications at the Battle of Franklin, just south of Nashville, Tennessee, on November 30, 1864. He was last seen advancing on foot toward the Union line with his sword raised, after his horse was shot out from under him.[16] Accounts later said that he was found just inside the Federal line and his body carried back to an aid station along the Columbia Turnpike. Confederate war records indicate he died of a shot to the abdomen,[2] or possibly a bullet that went through his heart. When Confederates found his body, he had been picked clean of any valuable items, including his sword, boots and pocket watch.[17] 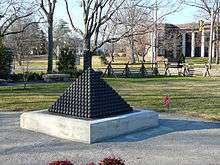 Memorial to Cleburne in Franklin 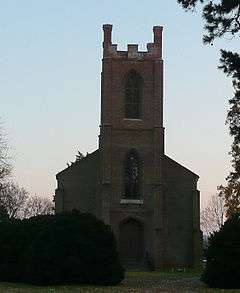 According to a letter written to General Cheatham from Judge Mangum post war, Cleburne's remains were first laid to rest at Rose Hill Cemetery in Columbia, Tennessee. At the urging of Army Chaplain Biship Quintard, Judge Mangum, staff officer to Cleburne and his law partner in Helena, had Cleburne's remains moved to St. John's Episcopal Church near Mount Pleasant, Tennessee, where they remained for six years. He had first observed St. John's during the Army of Tennessee's march into Tennessee during the campaign that led to the Battle of Franklin and commented that it was the place he would like to be buried because of its great beauty and resemblance to his Irish homeland. In 1870, he was disinterred and returned to his adopted hometown of Helena, Arkansas, with much fanfare, and buried in the Confederate section of Maple Hill Cemetery, overlooking the Mississippi River.[18]

William J. Hardee, Cleburne's former corps commander, had this to say when he learned of his loss: "Where this division defended, no odds broke its line; where it attacked, no numbers resisted its onslaught, save only once; and there is the grave of Cleburne."[17]

Several geographic features are named after Patrick Cleburne, including Cleburne County in Alabama and Arkansas, and the city of Cleburne, Texas.[19] The location where he was killed in Franklin, Tennessee was reclaimed by preservationists and is now known as Cleburne Park. Though the small monument in the park is often perceived as a monument to Cleburne, it actually is a marker to show where The Carter Family Cotton Gin once stood (the gin being an integral part of the Battle of Franklin, and The Carter House itself being the headquarters of Union Brigadier General Jacob D. Cox).

The Patrick R. Cleburne Confederate Cemetery is a memorial cemetery in Jonesboro, Georgia that was named in honor of General Patrick Cleburne.[20]