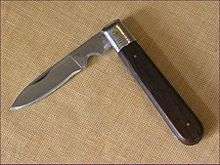 A penknife, or pen knife, is a British English term for a small folding knife.[1] Originally, penknives were used for thinning and pointing quills to prepare them for use as dip pens and, later, for repairing or re-pointing the nib.[1] They did not necessarily have folding blades, but resembled a scalpel or wood knife by having a short, fixed blade at the end of a long handle.

Today the word penknife is the common British English term for both a pocketknife, which can have single or multiple blades, and for multi-tools, with additional tools incorporated into the design.[2]

Over the last hundred years there has been a proliferation of multi-function knives with multifarious blades and gadgets, including; awls, reamers, scissors, nail files, corkscrews, tweezers, toothpicks, and so on. The tradition continues with the incorporation of modern devices such as ballpoint pens, LED torches, and USB flash drives.[3]

The most famous example of a multi-function penknife is the Swiss Army knife, some versions of which number dozens of functions and are really more of a folding multi-tool, incorporating a blade or two, than a penknife with extras.[3]

A larger folding knife, especially one in which the blade locks into place, is often called a claspknife.[3]