The people's commune (Chinese: 人民公社; pinyin: rénmín gōngshè) was the highest of three administrative levels in rural areas of the People's Republic of China during the period from 1958 to 1983 when they were replaced by townships. Communes, the largest collective units, were divided in turn into production brigades and production teams. The communes had governmental, political, and economic functions.

The People's commune was born during the Great Leap Forward, when Mao Zedong had a vision of surpassing the United Kingdom and the United States in a short period of time in terms of steel production. Mao also wanted to mobilize peasants to undertake huge water projects during the winter slack seasons in order to improve agricultural productivity.

Each commune was a combination of smaller farm collectives and consisted of 4,000–5,000 households. Larger communes could consist of up to 20,000 households.

The Peoples' commune was made official state policy in 1958 after Mao Zedong visited an unofficial commune in Henan.

In order to put this radical plan into action, Mao used the Anti-Rightist Movement to silence his political opponents so he faced virtually no opposition when he finally implemented the People's communes. Using various propaganda campaigns, Mao gained the initial support of the peasants.

The People's communes were formed in support of the Great Leap Forward campaign and remains an inseparable part of the campaign, as shown in the Three Red Banners propaganda poster.

In the commune, everything was shared. Private kitchens became redundant, and everything in the private kitchen, such as tables, chairs, cooking utensils and pans were all contributed to the commune's kitchen. Private cooking was banned and replaced by communal dining.

Everything originally owned by the households, private animals, stored grains and other food items were also contributed to the commune. They were put to different uses as assigned by the commune. All farming activities were to be centrally assigned by cadres every morning. Even money was outlawed in some places. Everybody in the commune were assigned jobs by their commune leaders.

The communes exercised management and control of all rural resources such as labor and land. Because of governmental control over resources and bad weather in 1958, 1959 and 1960 famine became widespread amongst the countryside, with many food resources being exported to urban areas.[1] 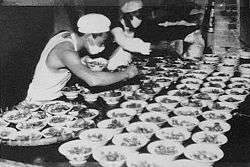 1958 People's commune free for all kitchen, where members were supposed to be able to eat all they can eat.

Cold War era terminology such as Communist China/regime is being used in this film clip. 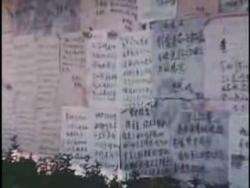