For other uses, see Pepper (disambiguation).

Pepper is a three piece rock band originally from Hawaii,[3] now based in San Diego.[4] The band consists of vocalist/guitarist Kaleo Wassman, vocalist/bassist Bret Bollinger, and drummer Yesod Williams. Since the band's formation they have released five studio albums as well as one live album.

Pepper formed in 1996 with singer/guitarist Kaleo Wassman and bassist/singer Bret Bollinger, who had been friends since middle school.[5] The duo was influenced by the Hawaiian artist Three Plus and popular mainland groups like Sublime. The group struggled to find a drummer to be in the band, with Wassman stating " we were going through drummers like a bottomless pit."[5] Wassman and Bollinger heard about a drummer named Yesod Williams who had gained success around their small town, and later met Williams at a party.[5][6] The two convinced Williams to join the band, and with the trio in place, Pepper left Hawaii for San Diego and went on to open shows by Burning Spear, Shaggy, and other major reggae artists. Pepper first entered the studio in 1997 and recorded a seven-song demo.[7]

In 1999, after gathering a small local following on the Big Island, Pepper gained the interest of an independent, L.A.-based record company, Volcom Entertainment. Volcom produced and distributed the band's debut release, Give'n It, which combined dancehall, reggae, hip-hop, and pop genres and the band made it on the 2001 Warped Tour.[8] 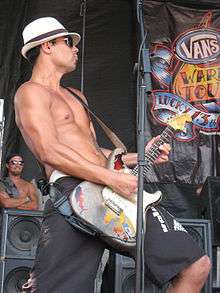 Kaleo Wassman of Pepper performing at Warped Tour in 2007.

After years of extensive touring, Pepper took to the studio with Steve Kravac (Less Than Jake, MXPX) to record their second album entitled Kona Town, released in March 2002. The track "Give It Up" was released as a single. Pepper continued to tour throughout 2003 and into 2004, including dates with 311 and Snoop Dogg, along with appearances at the annual Bob Marley Birthday celebration, San Diego's Festival "Street Scene", and a U.S. tour with Slightly Stoopid.[6][9]

In March 2004 Pepper released In With The Old, and got to No. 35 on the Billboard Heat Seekers and No. 18 on the independent albums chart. The album was recorded at 311's completely analog Hive Studios by board master Ron St. Germain (Bad Brains, Living Colour, 311, Tool, Sonic Youth, Soundgarden), the album showcases a broader range of influences shared by the trio. The band used punk keyboardist/producer Ronnie King on In With The Old as well as their later album, No Shame.

2006-2009: No Shame and Pink Crustaceans and Good Vibrations

Beginning on July 20, 2006, Pepper supported 311 along with The Wailers on their U.S. tour. In August 2006, Jägermeister announced that Pepper & Slightly Stoopid would headline the annual Jägermeister Musictour through December 2006.

The band released their fourth album (and minor label debut) entitled No Shame on October 3, 2006. It features production from Nick Hexum of 311, Tony Kanal of No Doubt, and Sublime producer/ Butthole Surfers member Paul Leary. A music video was shot for the single "No Control".

Pepper appeared on all dates of the 2007 Warped Tour, toured with The Expendables and Passafire, on their "That's Where I Wanna Be..." 42 stop tour from October to December 2007.

Pepper released a new album on July 22, 2008, entitled Pink Crustaceans and Good Vibrations on their own label, Law Records.[10] The band toured across the United States in 2008 from March through April with Redeye Empire and Iration. A European tour in support of Flogging Molly followed, including shows in Germany, Sweden, France, Italy and more. From August 1, 2008 to September 6, 2008, the band toured the US on the Tailgate 2008 Summer Tour. The band is now touring with Slightly Stoopid and Sly & Robbie. The band also headlined the "Law Records" tour in October 2008 along with Passafire, and The Supervillains. This was their first tour consisting of only Law Records bands. After a UK tour with Less than Jake, and a break in December, Pepper, Passafire, and The Supervillains toured the Northwest to complete the first Law Records tour.

Pepper released their new EP album titled Stitches on 12 October 2010. A single, "Wake Up", from the album was released June 28, 2010 along with "Mirror" & the band toured with 311 to promote the album. Pepper also toured on the "Like a Surgeon Tour" with Shwayze, Pour Habit, and Brother Ali in the last quarter of 2010.

Pepper was one of the headliners for the 2011 Warped Tour. During the summer and fall of 2012, they toured with Sublime with Rome and Cypress Hill.