For other uses, see Performance (disambiguation). 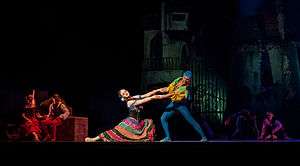 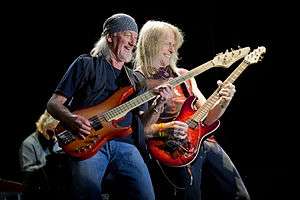 A performance, in the performing arts, generally comprises an event in which a performer or group of performers present one or more works of art to an audience. Usually the performers participate in rehearsals beforehand. Afterwards audience members often applaud.

The means of expressing appreciation can vary by culture. Chinese performers will clap with the audience at the end of a performance; the return applause signals "thank you" to the audience.[1] In Japan, folk performing-arts performances commonly attract individuals who take photographs, sometimes getting up to the stage and within inches of performer's faces.[2]

Sometimes the dividing line between performer and the audience may become blurred, as in the example of "participatory theatre" where audience members get involved in the production.

Examples of performance genres include: 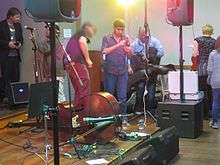 After the performance has ended; showing stage clutter such as microphone stands, drinks, cables, speakers (2013)

Music performance (a concert or a recital) may take place indoors in a concert hall or outdoors in a field, and may require the audience to remain very quiet, or encourage them to sing and dance along with the music.

A performance may also describe the way in which an actor performs. In a solo capacity, it may also refer to a mime artist, comedian, conjurer, or other entertainer.