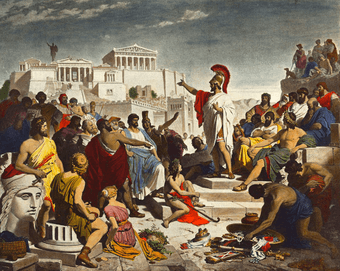 It was an established Athenian practice by the late 5th century to hold a public funeral in honor of all those who had died in war.[3] The remains of the dead[4] were left out for three days in a tent, where offerings could be made for the dead. Then a funeral procession was held, with ten cypress coffins carrying the remains, one for each of the Athenian tribes, and another for the remains that could not be identified. The procession led to a public grave (at the Kerameikos), where they were buried. The last part of the ceremony was a speech delivered by a prominent Athenian citizen.

Several funeral orations from classical Athens are still extant, which seem to corroborate Thucydides' assertion that this was a regular feature of Athenian funerary custom in wartime.[5]

The Funeral Oration was recorded by Thucydides in book two of his famous History of the Peloponnesian War. Although Thucydides records the speech in the first person as if it were a word for word record of what Pericles said, there can be little doubt that he edited the speech at the very least. Thucydides says early in his History that the speeches presented are not verbatim records, but are intended to represent the main ideas of what was said and what was, according to Thucydides, "called for in the situation".[6] We can be reasonably sure that Pericles delivered a speech at the end of the first year of the war, but there is no consensus as to what degree Thucydides' record resembles Pericles' actual speech.[7] Another confusing factor is that Pericles is known to have delivered another funeral oration in 440 BC during the Samian War.[8] It is possible that elements of both speeches are represented in Thucydides's version. Nevertheless Thucydides was extremely meticulous in his documentation, and records the varied certainty of his sources each time. Significantly he begins recounting the speech by saying: "Περικλῆς ὁ Ξανθίππου ... ἔλεγε τοιάδε", i.e. "Pericles, son of Xanthippos, spoke like this". Had he quoted the speech verbatim, he would have written "τάδε" ("this", or "these words") instead of "τοιάδε" ("like this" or "words like these"). The most likely possibility therefore is that Thucydides writes from his own memory of the event, in which case verbatim quotation is doubtful, though it is likely that Pericles' emblematic points have been faithfully recorded.

The Funeral Oration is significant because it departs from the typical formula of Athenian funeral speeches.[9] David Cartwright describes it as "a eulogy of Athens itself...".[10] The speech is a glorification of Athens's achievements, designed to stir the spirits of a state still at war.

The speech begins by praising the custom of the public funeral for the war dead, but criticizes the inclusion of the speech, arguing that the "reputations of many brave men" should "not be imperiled in the mouth of a single individual".[11] Pericles argues that the speaker of the oration has the impossible task of satisfying the associates of the dead, who would wish that their deeds be magnified, while everyone else might feel jealous and suspect exaggeration.[12]

Pericles begins his praise of the war dead, as the other Athenian funeral orations do, by praising the ancestors of present day Athenians (2.36.1-2.36.3), touching briefly on the acquisition of the empire.

At this point, however, Pericles departs most dramatically from the example of other Athenian funeral orations and skips over the great martial achievements of Athens' past: "That part of our history which tells of the military achievements which gave us our several possessions, or of the ready valour with which either we or our fathers stemmed the tide of Hellenic or foreign aggression, is a theme too familiar to my hearers for me to dwell upon, and I shall therefore pass it by."[13] Instead, Pericles proposes to focus on "the road by which we reached our position, the form of government under which our greatness grew, and the national habits out of which it sprang".[13] This amounts to a focus on present day Athens; Thucydides' Pericles thus decides to praise the war dead by glorifying the city for which they died.

The greatness of Athens

"If we look to the laws, they afford equal justice to all in their private differences...if a man is able to serve the state, he is not hindered by the obscurity of his condition. The freedom we enjoy in our government extends also to our ordinary life. There, far from exercising a jealous surveillance over each other, we do not feel called upon to be angry with our neighbor for doing what he likes..."[14] These lines form the roots of the famous phrase "equal justice under law." The liberality of which Pericles spoke also extended to Athens' foreign policy: "We throw open our city to the world, and never by alien acts exclude foreigners from any opportunity of learning or observing, although the eyes of an enemy may occasionally profit by our liberality..."[15] Yet Athens's values of equality and openness do not, according to Pericles, hinder Athens's greatness, indeed, they enhance it, "...advancement in public life falls to reputations for capacity, class considerations not being allowed to interfere with merit...our ordinary citizens, though occupied with the pursuits of industry, are still fair judges of public matters...at Athens we live exactly as we please, and yet are just as ready to encounter every legitimate danger."[16]

In the climax of his praise of Athens, Pericles declares: "In short, I say that as a city we are the school of Hellas; while I doubt if the world can produce a man, who where he has only himself to depend upon, is equal to so many emergencies, and graced by so happy a versatility as the Athenian."[17] Finally, Pericles links his praise of the city to the dead Athenians for whom he is speaking, "...for the Athens that I have celebrated is only what the heroism of these and their like have made her...none of these men allowed either wealth with its prospect of future enjoyment to unnerve his spirit, or poverty with its hope of a day of freedom and riches to tempt him to shrink from danger. No, holding that vengeance upon their enemies was more to be desired than any personal blessings, and reckoning this to be the most glorious of hazards, they joyfully determined to accept the risk... Thus, choosing to die resisting, rather than to live submitting, they fled only from dishonour..."[18] The conclusion seems inevitable: "Therefore, having judged that to be happy means to be free, and to be free means to be brave, do not shy away from the risks of war". With the linkage of Athens' greatness complete, Pericles moves to addressing his audience.

Praise for the Military of Athens

In his speech, Pericles states that he had been emphasizing the greatness of Athens in order to convey that the citizens of Athens must continue to support the war, to show them that what they were fighting for was of the utmost importance. To help make his point he stated that the soldiers who he was speaking of gave their lives to a cause to protect the city of Athens, its citizens, and its freedom.[19] He praised Athens for its attributes that stood out amongst their neighbors such as its democracy when he elaborates that trust is justly placed on the citizens rather than relying only on the system and the policy of the city. Where citizens boast a freedom that differs from their enemies’ the Lacedaemonians.[20] He regards the soldiers who gave their lives as truly worth of merit. That if anyone should ask, they should look at their final moments when they gave their lives to their country and that should leave no doubt in the mind of the doubtful.[21] He explained that fighting for one’s country was a great honor, and that it was like wearing a cloak that concealed any negative implications because his imperfections would be outweighed by his merits as a citizen.[22] He praises the soldiers for not faltering in their execution during the war. That the soldiers put aside their desires and wishes for the greater cause. Because as the citizens are described by Pericles, the Athenian citizen were unique to other citizens that resided elsewhere, they were open minded, tolerant, and ready to understand and follow orders. Where their system of democracy allowed them to have a voice amongst those who made important decisions that would affect them. Therefore, he proceeds to point out that the greatest honor and act of valor in Athens is to live and die for freedom of Athens. A city that Pericles believed was different and special than in any other neighboring cities.[23]

Pericles then turns to the audience and exhorts them to live up to the standards set by the deceased, "So died these men as becomes Athenians. You, their survivors, must determine to have as unfaltering a resolution in the field, though you may pray that it may have a happier outcome." [24]

Pericles ends with a short epilogue, reminding the audience of the difficulty of the task of speaking over the dead. The audience is then dismissed.

Thucydides' Greek is notoriously difficult, but the language of Pericles Funeral Oration is considered by many to be the most difficult and virtuosic passage in the History of the Peloponnesian War. The speech is full of rhetorical devices, such as antithesis, anacoluthon, asyndeton, anastrophe, hyperbaton, and others; most famously the rapid succession of proparoxytone words beginning with e ("το εύδαιμον το ελεύθερον το δ' ελεύθερον το εύψυχον") at the climax of the speech. The style is deliberately elaborate, in accord with the stylistical preference associated with the sophists. There are several different English translations of the speech available.

It is uncertain to what degree, if any, Lincoln was directly influenced by Pericles' Funeral Oration. Wills never claims that Lincoln drew on it as a source, though Edward Everett, who delivered a lengthy oration at the same ceremony at Gettysburg, began by describing the "Athenian example".[31]