Pharaohs in the Bible

The Bible makes reference to various pharaohs of Egypt. These include unnamed pharaohs in the accounts of the Israelite settlement in Egypt, the subsequent oppression of the Israelites, and during the period of the Exodus, as well as a number of later rulers. 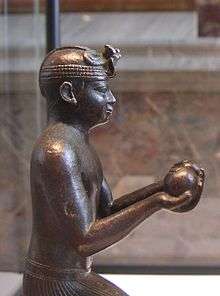 2 Kings 19:9 and Isaiah 37:9 mention the 25th dynasty pharaoh Taharqa (reigned 690-664 BC) as the opponent of Sennacherib of Assyria. He is called King of Ethiopia, and hence is not given the title pharaoh which he bears in Egyptian documents.

Conjectural pharaohs: Shishak and So

1 Kings 11:40 and 2 Chronicles 12:2 sqq. tell of an invasion of Israel by Shishak, and a subsequent raid of Jerusalem and the Temple of Solomon.

2 Kings 17:4 says that king Hoshea sent letters to "So, King of Egypt". No pharaoh of this name is known for the time of Hoshea (about 730 BC), during which Egypt had three dynasties ruling contemporaneously: 22nd at Tanis, 23rd at Leontopolis, and 24th at Sais. Nevertheless, this ruler is commonly identified with Osorkon IV (730-715 BC) who ruled from Tanis,[1][2] though it is possible that the biblical writer has confused the king with his city and equated So with Sais, at this time ruled by Tefnakht.

Pharaohs in the Book of Genesis 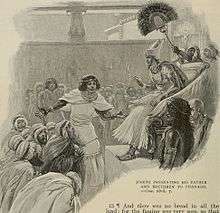 Joseph presenting his father and brethren to Pharaoh. (1896)

The passages Genesis 12:10-20 narrate how Abraham moves to Egypt to escape a period of famine in Canaan. The unnamed pharaoh hears of the beauty of Abraham's wife Sarah and, thinking she was Abraham's sister, summons her to become his own wife. As a result of the marriage, Abraham rises in the Pharaoh's favor and acquires livestock and servants. After discovering Sarah's true relationship to Abraham, however, the pharaoh releases her and Abraham and orders them to take their goods and to leave Egypt.

The last chapters of the book of Genesis (Genesis 37-50) tell how Joseph, son of Jacob/Israel, is first sold by his brothers into Egyptian slavery but is promoted by the unnamed pharaoh to vizier of Egypt and is given permission to bring his father, his brothers, and their families into Egypt to live in the Land of Goshen (eastern Nile Delta around modern Faqus).

Eugene H. Merrill has suggested that Senusret II (reigned from 1897 to 1878 BC), the fourth pharaoh of the Twelfth Dynasty, may be the unnamed Pharaoh mentioned in the biblical story of Joseph.[3]

Pharaohs in the Book of Exodus

The Bible tells how the Israelites are enslaved in Egypt and eventually escape under the leadership of Moses. At least one or two pharaohs are involved, the "pharaoh of the oppression" who enslaves the Israelites, and the "pharaoh of the exodus" during whose rule the Israelites escape. The biblical story of the Written Torah alone, does not name or give enough information to identify the period in which the events are set. There have thus been many suggestions as to which of Egypt's many rulers was involved. The Oral Torah and Rabbinic sources state that the First Temple stood for 410 years and the Seder Olam Rabbah (c.2nd century AD) place its construction in 832 BC and destruction in 422 BC (3338 AM), 165 years later than secular estimates. The Seder Olam Rabbah determines the commencement of the Exodus to 2448 AM (1313 BC). This date has become traditional in Rabbinic Judaism.[4] 1 Kings 6:1 states that the Exodus occurred 480 years before the construction of Solomon's Temple, which would imply a secular date of the Exodus c.1477 BC, or rabbinical date 2448 AM (1313 BC), both during Egypt's Eighteenth Dynasty, the first at its beginning and the latter at its end.[5] Furthermore, the 18th dynasty was the first of the New Kingdom of Egypt, which followed the expulsion of the Hyksos and their last king Khamudi (c. 1522 or 1540 BC) from Avaris in the northeastern region of the Nile Delta, marking the end of the Second Intermediate Period.[6]

These are some candidates put forward for the role of Pharaoh of the Exodus:

Pharaohs in the Books of Kings

In 1Kings 3:1, it is narrated that to seal an alliance, the pharaoh of Egypt gave a daughter in marriage to Solomon. The same ruler later captured the city of Gezer and gave it to Solomon as well (1Kings 9:16). No name is given for the pharaoh, and some hypotheses were proposed: