This article is about the 12th century Knight Templar. For the 16th century Huguenot, see Philippe de Mornay. 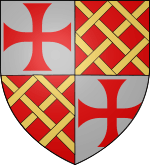 Philippe du Plessis (1165 – 12 November 1209)[1] was the 13th Grand Master of the Knights Templar. He was born in the fortress of Plessis-Macé, Anjou, France. In 1189 he joined the Third Crusade as a simple knight, and discovered the Order of the Temple in Palestine. After the death of Gilbert Horal he became Grand Master. He helped uphold the treaty between Saladin and Richard I. In the renewal of this treaty in 1208 he suggested that the Teutonic Order and Hospitallers should make a new peace treaty offer with Malek-Adel. The accord was criticised by Pope Innocent III.

There were few military actions during his rule; the Fourth Crusade never arrived in the Holy Land. The King of Armenia was in opposition to the Knights regarding the Gastein stronghold. The Templars were initially expelled from Armenia, but the pope intervened in the dispute.[2]

Relations with the Hospitaliers were tense. During his rule the Order of the Temple reached its greatest height in Europe.