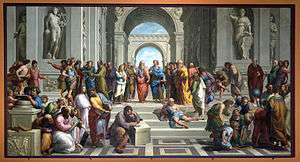 The School of Athens, by Raphael, depicting the central figures of Plato and Aristotle, and other ancient philosophers exchanging their knowledge.

A philosopher is someone who practices philosophy, which involves rational inquiry into areas that are outside of either theology or science.[1] The term "philosopher" comes from the Ancient Greek φιλόσοφος (philosophos) meaning "lover of wisdom". The coining of the term has been attributed to the Greek thinker Pythagoras.[2]

In the classical sense, a philosopher was someone who lived according to a certain way of life, focusing on resolving existential questions about the human condition, and not someone who discourses upon theories or comments upon authors.[3] Typically, these particular brands of philosophy are Hellenistic ones and those who most arduously commit themselves to this lifestyle may be considered philosophers.

In a modern sense, a philosopher is an intellectual who has contributed in one or more branches of philosophy, such as aesthetics, ethics, epistemology, logic, metaphysics, social theory, and political philosophy. A philosopher may also be one who worked in the humanities or other sciences which have since split from philosophy proper over the centuries, such as the arts, history, economics, sociology, psychology, linguistics, anthropology, theology, and politics.[4]

The separation of philosophy and science from theology began in Greece during the 6th century BC.[5] Thales, an astronomer and mathematician, was considered by Aristotle to be the first philosopher of the Greek tradition.[6]

While Pythagoras coined the word, the first known elaboration on the topic was conducted by Plato. In his Symposium, he concludes that Love is that which lacks the object it seeks. Therefore, the philosopher is one who seeks wisdom; if he attains wisdom, he would be a sage. Therefore, the philosopher in antiquity was one who lives in the constant pursuit of wisdom, and living in accordance to that wisdom.[7] Disagreements arose as to what living philosophically entailed. These disagreements gave rise to different Hellenistic schools of philosophy. In consequence, the ancient philosopher thought in a tradition.[8] As the ancient world became schism by philosophical debate, the competition lay in living in manner that would transform his whole way of living in the world.[9]

Among the last of these philosophers was Marcus Aurelius, who is widely regarded as a philosopher in the modern sense, but personally refused to call himself by such a title, since he had a duty to live as an emperor.[10]

According to the Classicist Pierre Hadot, the modern conception of a philosopher and philosophy developed predominately through three changes:

The first is the natural inclination of the philosophical mind. Philosophy is a tempting discipline which can easily carry away the individual in analyzing the universe and abstract theory.[11]

The second is the historical change through the Medieval era. With the rise of Christianity, the philosophical way of life was adopted by its theology. Thus, philosophy was divided between a way of life and the conceptual, logical, physical and metaphysical materials to justify that way of life. Philosophy was then the servant to theology.[12]

The third is the sociological need with the development of the university. The modern university requires professionals to teach. Maintaining itself requires teaching future professionals to replace the current faculty. Therefore, the discipline degrades into a technical language reserved for specialists, completely eschewing its original conception as a way of life.[12]

In the fourth century, the word philosopher began to designate a man or woman who led a monastic life. Gregory of Nyssa, for example, describes how his sister Macrina persuaded their mother to forsake "the distractions of material life" for a life of philosophy.[13]

Later during the Middle Ages, persons who engaged with alchemy was called a philosopher - thus, the Philosopher's Stone.[14]

Many philosophers still emerged from the Classical tradition, as saw their philosophy as a way of life. Among the most notable are René Descartes, Baruch Spinoza, Nicolas Malebranche, and Gottfried Wilhelm Leibniz. With the rise of the university, the modern conception of philosophy became more prominent. Many of the esteemed philosophers of the eighteenth century and onward have attended, taught, and developed their works in university. Early examples include: Immanuel Kant, Johann Gottlieb Fichte, Friedrich Wilhelm Joseph Schelling, and Georg Wilhelm Friedrich Hegel.[15]

After these individuals, the Classical conception had all but died with the exceptions of Arthur Schopenhauer and Friedrich Nietzsche. The last considerable figure in philosophy to not have followed a strict and orthodox academic regime was Ludwig Wittgenstein.[16]

In the modern era, those attaining advanced degrees in philosophy often choose to stay in careers within the educational system. According to a 1993 study by the National Research Council (as reported by the American Philosophical Association), 77.1% of the 7,900 holders of a Ph.D. in philosophy who responded were employed in educational institutions (academia). Outside of academia, philosophers may employ their writing and reasoning skills in other careers, such as medicine, bioethics, business, publishing, free-lance writing, media, and law.[17]

Various prizes in philosophy exist. Among the most prominent are:

The John W. Kluge Prize for the Study of Humanity, created by the Library of Congress to recognize work not covered by the Nobel Prizes, was given to philosophers Leszek Kołakowski in 2003, Paul Ricoeur in 2004, and Jürgen Habermas and Charles Taylor in 2015.[18]