For other types of albums, see Album (disambiguation). 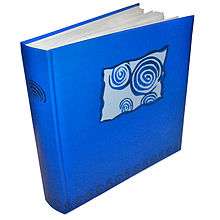 A photographic album, or photo album, is a collection of photographs, generally in a book. Some book-form photo albums have compartments which the photos may be slipped into; other albums have heavy paper with an abrasive surface covered with clear plastic sheets, on which surface photos can be put. Older style albums often were simply books of heavy paper which photos could be glued to or attached to with adhesive corners or pages.

Showing photo albums at home is becoming an increasingly popular pastime. With most homes owning one or more digital cameras and inkjet printers, albums can be created as a family or event record, for both a short duration or as part of the family archives.

Too often a collection of photographs can end up in boxes, or on a bookshelf of unlabelled volumes. To craft them into a properly ordered family tree where each person has their own portraits, and to group pictures in age order requires a lot of effort. The benefit of reordering a photo collection is that a person's life can be related to the people around them in a pictorial way.

Printed photo albums are also more interesting than 6x4" (15x10cm) prints, whether printed at home or at a lab. The designer can use a variety of shapes, multiple photos per page (thereby saving cost) and can add titles, text, borders and backgrounds.

Photo album production can be allied to scrapbooking.

There are several software packages for designers of albums. Examples are Fotoslate 4 from ACD Systems, Scrapbook Factory from Nova Development, and products from printer OEM’s such as HP, Epson and Canon, as well as offerings from Serif and Corel.

Coffee table books get their name from the intended purpose of being placed on a coffee table for the entertainment of guests. Coffee table books are photo books, and come in various sizes from very small to very big. They are printed books, They have soft, thin pages like normal books. A coffee table book is typically larger and is bound in a hard cover, whereas a smaller photo book is normally bound in a soft cover. The print quality of photo books varies from photographic paper prints to inkjet prints on normal paper.

Digital photo books have digitally printed pages as opposed to albums that consist of traditional photos. Both flush mount albums as well as coffee table books are printed digitally. The photos of flush mount albums are printed on photographic paper, which is comparable to the quality of traditionally developed photos. Coffee table books, on the other hand, are printed with inkjet on ordinary paper and are therefore of a lower quality. Digital printing gives the album designer a vast number of design possibilities, for example magazine-style or montage albums are only possible with digital printing.

Digital photo books are increasingly popular because they allow anyone with a digital camera to create coffee table books of their photos. Also, it is often considered easier to print photos onto pages directly, rather than position and secure individual prints onto the pages of a traditional album. Aesthetically, digital photo books seem neater and more professional than albums. This has led to their growing popularity amongst both professional and amateur photographers. Digital photo book printing companies have used the internet to make designing and producing photo books very easy for the general consumer.

Flush mount albums have hard covers with thick, unbending pages. They consist of photographic prints that were dry-mounted on cardboard. The covers are mostly made of leather, leatherette or glass. The photos lie completely flat and extend across the whole page. Flush mount albums are usually designed in magazine-style. They are most often used for special occasions such as weddings and anniversaries due to the fact that they are produced at a higher quality and are more expensive to produce than coffee table books.

The term magazine-style refers to the design style inspired by fashion magazines, but the style can differ greatly between albums dependent on the designer. The layout is usually referred to as digital montage, hence the alternative name montage albums. The layout is designed on the computer, utilizing custom- or template- generated images.

Storybook albums narrate a story, like the story of a wedding day or a vacation from beginning to end. If they are digitally printed the designer can use images as well as text, graphics and colour for the narration of the story.

Historybook albums describe a history, like the history of a particular field or a digital console from beginning to end or present day. If they are digitally printed the designer can use images as well as text, graphics and colour for the sequential theme of the history.

Homemade decorative albums can easily be made at home. The items needed to make this type of album may already be a part of the home office supplies. Items consist of: binder folders, clear sheet protectors or picture sleeves, fabric of choice, and a hot glue gun. Some may choose to use stuffing to give a fluff to the album. This type of album is simple to make; and allows the crafter to explore their creative side, while adding a personal touch.

Matted albums are albums with recessed frames, in which each photo is hand-mounted. The photos are digitally or traditionally printed and can also be changed also after completion of the album.

There are many software programs available to organize images in folders or albums, such as Adobe Photoshop Album and Picasa. These programs generally allow for sorting and ordering of different images, tagging the images, and viewing them in slideshows or printing them. These programs commonly allow the user to perform basic edits such as cropping, red-eye removal, and some basic "one touch" enhancements for color and lighting. Some online albums have introduced techniques of separating special effects from the original picture so that the picture is not edited - effects are applied when displayed without destroying the original picture.