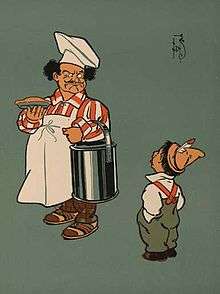 The Pieman by W.W. Denslow

Pie or, Pieman, Pieman is an outdoor game for more than three children. Its origin is unknown. A variant exists called Easter Eggs.

The game requires a seating area for the players (such as a flight of porch steps or a garden wall) which is designated the "Pie Shop" or "Bakery." Also required are a Goal distant from the seating area such as a tree, post or other object, and an expanse of lawn or field for a chase similar to the chase in the game of Tag.

One player is chosen Pieman, another Buyer, and the other players are Pies. The Buyer is sometimes designated Simple Simon following the Mother Goose rhyme:

Simple Simon met a pieman
Going to the fair;
Says Simple Simon to the pieman,
"Let me taste your ware."

To begin the game, the Buyer is sent to the Goal where he cannot see or hear the other players. The Pieman then names each Pie with a common pie filling such as Apple, Blueberry, Pumpkin, etc. When all the Pies have been named, the Pieman calls the Buyer to the Pie Shop.

The Buyer demands, "Pieman, Pieman, I would like a pie." The Pieman asks, "And what might that Pie be?" The Buyer then names a pie flavor such as Apple. If one of the Pies has been designated Apple, then he rushes from the Pie Shop to the Goal while the Buyer runs after him and attempts to tag him. Both the Pie and the Buyer must touch the Goal before running back to the Pie Shop. If the Pie returns to the Pie Shop without being tagged, he resumes his seat, and is renamed for another round. The chase may be complicated with dodging about lawn furniture, flower beds, clotheslines of drying laundry, or other obstacles in the path to and from the Goal.

Before the Buyer leaves the Pie Shop in pursuit of the Pie, he is required to pay the Pieman the price he asks for the Pie (such as 10 dollars). Payment is accomplished by slapping the Pieman's outstretched, up-turned palm, and counting aloud the required number of "dollars." Paying the Pieman gives slower, or smaller Pies a "head-start" against the Buyer.

Should the Pie be "tagged" during his flight to the Goal, he becomes the Buyer, the Buyer becomes a Pie, and play resumes in a similar manner.

A variation of the game for children who may have limited knowledge of pie flavors is Easter Eggs. Here, players are given colors (red, blue, green, purple，etc.) rather than pie fillings. The Pieman becomes The Easter Bunny and the seating area the Easter Basket. Another variant is called Red Devil, where one child is removed from the group, and the kids are assigned colors (pink,yellow,blue) the child then returns and says "Red Devil, Red Devil, may I borrow a crayon?" the group then asks "What color?" and like pie the color chosen must try to catch the asker before the asker takes that person's seat.

In another variant, the Buyer is known as the Witch. The Witch says to the Baker: "Do you have any pies today?" The Baker replies, "What kind do you want?" If the Witch names one of the Pies, he or she must chase the named Pie around a designated spot, such as a tree or a light post. If the Pie gets back to the Pie Shop safely, the game begins again. However, if the Pie is caught, he or she becomes the new Witch. The Witch now becomes a Pie and sits with the others on the Pie Shop shelf and the game continues.