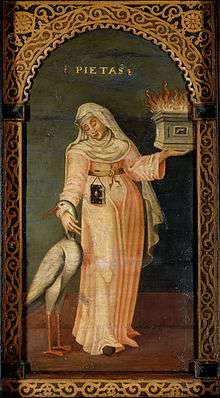 In spiritual terminology, piety is a virtue that may include religious devotion, spirituality, or a mixture of both. A common element in most conceptions of piety is humility and religiosity.

The word piety comes from the Latin word pietas, the noun form of the adjective pius (which means "devout" or "dutiful"). Pietas in traditional Latin usage expressed a complex, highly valued Roman virtue; a man with pietas respected his responsibilities to gods, country, parents, and kin.[1] In its strictest sense it was the sort of love a son ought to have for his father.

The Latin term in turn may derive from Ancient Greek transliteration of Ancient Egyptian variants of Pouonsis or Piounsis meaning "wolf", an analogous name for the Egyptian war deity Wepwawet ("opener of the ways"), attested officially as early as 332 BC.[2]

Piety in modern English usage can refer to a way to win the favour or forgiveness of God. According to some, this type of piety does not necessarily require spiritual piety, while others refrain from distinguishing the two.

It is also used by others to refer only to external signs that result from the spiritual aspect of piety. That is, according to some, if one is "truly" pious (in the spiritual sense), the natural and inevitable result of it will be religious piety. By this definition, then, piety can be either genuine, in that it springs from spiritual piety, or false, in that it is an attempt to exhibit the signs of piety for their own sake, or for some other reason (such as propitiation or public esteem).

Piety in a historical context implied high morality, as religious diversity was unlike what is seen in modern populations. Piety now often refers to great devotion to one's own religion but may not have a modern moral association.

In Catholicism, Eastern Orthodoxy, Lutheranism, and Anglicanism, piety is one of the seven gifts of the Holy Spirit.

Piety can be demonstrated by position or state of mind, such as prayer. The best known gestures demonstrating piety are kneeling in Christianity, bowing down to pray in Islam, and prostration (Buddhism).