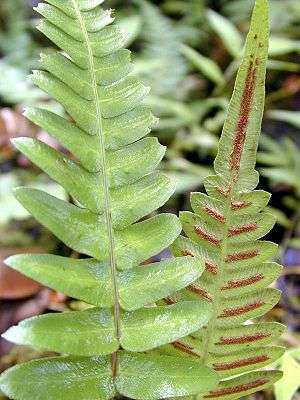 A simple pinnate (unipinnate) frond of the fern, Blechnum appendiculatum.

Pinnation (also called pennation) is the arrangement of feather-like or multi-divided features arising from both sides of a common axis. Pinnation occurs in biological morphology, in crystals,[1] such as some forms of ice or metal crystals,[2][3] and in patterns of erosion or stream beds.[4]

The term derives from the Latin word pinna meaning "feather", "wing", or "fin". A similar concept is pectination, which is a comb-like arrangement of parts (arising from one side of an axis only). Pinnation is commonly referred to in contrast to palmation, in which the parts or structures radiate out from a common point. The terms pinnation and pennation are cognate, and although they are sometimes used distinctly, there is no consistent difference in the meaning or usage of the two words.[5][6] 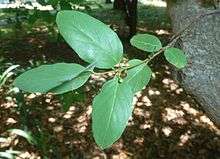 Pinnate venation in each leaf, in this case alternate-pinnate

Botanically, pinnation is an arrangement of discrete structures (such as leaflets, veins, lobes, branches, or appendages) arising at multiple points along a common axis. For example, once-divided leaf blades having leaflets arranged on both sides of a rachis are pinnately compound leaves. Many palms (notably the feather palms) and most cycads and grevilleas have pinnately divided leaves. Most species of ferns have pinnate or more highly divided fronds, and in ferns the leaflets or segments are typically referred to as "pinnae" (singular "pinna"). Plants with pinnate leaves are sometimes colloquially called "feather-leaved". Most of the following definitions are from Jackson's Glossary of Botanical Terms:[6] 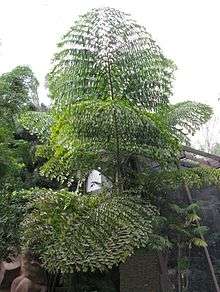 Bipinnate leaves of species of palm in the genus Caryota

The term pinnula (plural: pinnulae) is the Latin diminutive of pinna (plural: pinnae); either as such or in the Anglicised form: pinnule, it is differently defined by various authorities. Some apply it to the leaflets of a pinna, especially the leaflets of bipinnate or tripinnate leaves.[7] Others also or alternatively apply it second or third order divisions of a bipinnate or tripinnate leaf.[8] It is the ultimate free division (or leaflet) of a compound leaf, or a pinnate subdivision of a multipinnate leaf.

In animals, pinnation occurs in various organisms and structures, including:

Pinnation occurs in certain waterway systems in which all major tributary streams enter the main channels by flowing in one direction at an oblique angle.