For the helmet used in tropical and subtropical climates, see pith helmet. For the slaughtering technique, see pithing.

Walnut shoot cut longitudinally to show the chambered pith found in this genus. Scale in mm. 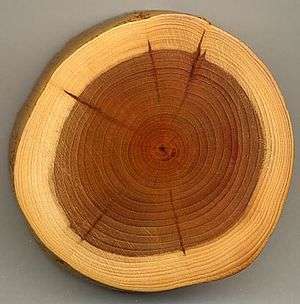 Pith, or medulla, is a tissue in the stems of vascular plants. Pith is composed of soft, spongy parenchyma cells, which store and transport nutrients throughout the plant. In eudicots, pith is located in the center of the stem. In monocots, it extends also into flowering stems and roots. The pith is encircled by a ring of xylem; the xylem, in turn, is encircled by a ring of phloem.

While new pith growth is usually white or pale in color, as the tissue ages it commonly darkens to a deeper brown color. In trees pith is generally present in young growth, but in the trunk and older branches the pith often gets replaced - in great part - by xylem. In some plants, the pith in the middle of the stem may dry out and disintegrate, resulting in a hollow stem. A few plants, such as walnuts, have distinctive chambered pith with numerous short cavities (See image at middle right). The cells in the peripheral parts of the pith may, in some plants, develop to be different from cells in the rest of the pith. This layer of cells is then called the perimedullary region of the pithamus. An example of this can be observed in Hedera helix, a species of ivy.

The term pith is also used to refer to the pale, spongy inner layer of the rind - more properly called mesocarp or albedo - of citrus fruits (such as oranges) and other hesperidia. The word comes from the Old English word piþa, meaning substance, akin to Middle Dutch pitt, meaning the pit of a fruit.[1]

The pith of the sola or other similar plants is used to make the pith helmet.[2]

The pith of the sago palm, although highly toxic to animals in its raw form, is an important human food source in Melanesia and Micronesia by virtue of its starch content and its availability. There is an easy, primitive process of starch extraction from sago pith that leaches away a sufficient amount of the toxins and thus only the starch component is consumed. The form of the starch after processing is similar to tapioca.