Play is an open source web application framework, written in Scala and also usable from e.g. Java (Play includes a Java wrapper API in latest version), which follows the model–view–controller (MVC) architectural pattern. It aims to optimize developer productivity by using convention over configuration, hot code reloading and display of errors in the browser.[2]

Support for the Scala programming language has been available since version 1.1 of the framework.[3] In version 2.0, the framework core was rewritten in Scala. Build and deployment was migrated to SBT, and templates use Scala instead of Groovy.

Play was created by software developer Guillaume Bort, while working at Zengularity SA (formerly Zenexity).[4] Although the early releases are no longer available online, there is evidence of Play existing as far back as May 2007.[5] In 2007 pre-release versions of the project were available to download from Zenexity's website.[6]

Play 1.1 was released in November 2010 after a move from Launchpad to GitHub. It included a migration from Apache MINA to JBoss Netty, Scala support, native GlassFish container, an asynchronous web services library, OAuth support, HTTPS support and other features.[9]

Play 1.2 was released in April 2011. It included dependency management with Apache Ivy, support for WebSocket, integrated database migration (reversion is not implemented yet[10]), a switch to the H2 database and other features.[11]

Play 2.1 was released on February 6, 2013, upgraded to Scala 2.10 and introduced, among other new features, modularisation, a new JSON API, filters and RequireJS support.[14]

Play 2.2 was released on September 20, 2013. Upgraded support for SBT to 0.13, better support for buffering, built in support for gzip and new stage and dist tasks with support for native packaging on several platforms such as OS X (DMG), Linux (RPM, DEB), and Windows (MSI) as well as zipfiles.

Play is heavily inspired by ASP.NET MVC, Ruby on Rails and Django and is similar to this family of frameworks. Play web applications can be written in Scala or Java, in an environment that may be less Java Enterprise Edition-centric. Play uses no Java EE constraints. This can make Play simpler to develop compared to other Java-centric platforms.[15]

Although Play applications are designed to be run using the built-in JBoss Netty web server, they can also be packaged as WAR files to be distributed to standard Java EE application servers.[16]

The following functionality is present in the core:

Play provides a built-in test framework for unit testing and functional testing. Tests are run directly in the browser by going to the URL <serverurl>/@tests. By default all testing is done against the included H2 in-memory database. 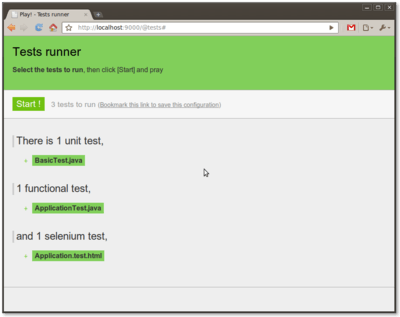 The mailing list for the project has over 11,000 subscribers.[18] It is used in various projects such as local governments, company intranets, mobile web sites and Open Source projects.

In December 2010, the first e-book for the Play framework was released.[23] This was subsequently also published in hard copy. In August 2011, a second book was released, covering more complex and modern features.[24]

In August 2011, Heroku announced native support for Play applications on its cloud computing platform.[25] This follows module-based support for Play 1.0 (but not Play 2.x) on Google App Engine, and documented support on Amazon Web Services.[26]

In July 2013, Jelastic published a tutorial showing support for Play 2 on its cloud computing platform.[27]